The Polish born immigrant, Mollie Lieber West, came to the United States in 1929 at the age of 13. After graduating from high school, Mollie went on to work for the Farm Equipment Workers of American, an early CIO union. She was a member of the Communist Party from 1935 to 1962. Mollie initially joined the Young Communist League working as a labor organizer. After several years of being forced into underground hiding in the 1950s, she broke ties with the Communist Party in 1962.

Mollie surpassed gender barriers as a member of the Typographical Union. She was the first woman elected to a union office in the Chicago typographical Union, Local 16. In her sixties, Mollie earned a Bachelor’s degree in labor education from Mundelein’s Weekend College. After her retirement from the printing trade in 1987, Mollie worked at the Illinois Labor History Society as the administrative secretary and volunteer. Her time there allowed her to continue to promote education and recognition for labor leaders.

Most of what I knew about Mollie West related to her work for the union. I had read through her biographical information on her finding aid and had also been told a little bit about her. Mollie’s life was rather fascinating but what truly caught my attention were all of the items in her collection at the Women and Leadership Archives that pertained more to her personal life. I came across some of Mollie’s personal items when I was looking for photos to scan for her memorial. What a delightful feeling it was to discover that her collection contains a plethora of information unrelated to the union. Pictures, letters, school papers, and greeting cards are just a few of the materials highlighting Mollie’s personal life. In particular, I relished my time spent sifting through her travel photos. Mollie spent most of her life in Chicago but her photos indicate that she traveled far beyond the borders of the windy city.

As someone who has been fortunate enough to travel abroad, I was instantly interested in Mollie’s travels. She traveled to places decades before I ever set foot on a plane and I only wish I could swap stories with her. I am sure there would have been many things to compare and contrast about our trips. Her photos gave me a glimpse into travel in the Soviet Union in 1940s, Israel in the 1950s, Mexico in the 1960s, England 1970s, China in the 1980s, and Switzerland in the 1990s. From the hairstyles to the clothes to the breathtaking scenery, Mollie’s photos are a visual treat to look through. 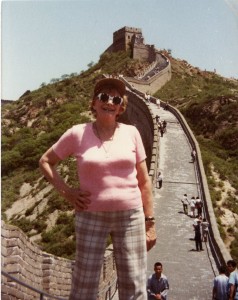 Mollie West on the Great Wall of China

Her photo collection raises some broader questions about the history of travel. How easy or difficult was it to travel abroad in the latter half of the twentieth century? How is travel similar and how has it changed over the years? How has tourism changed over the years? These are all questions that at first glance at Mollie’s collection may not seem as though they could be answered. In fact, a researcher may not even look at Mollie’s collection if the researcher is not focused on labor unions. Archives are full of hidden gems of information and resources. Researchers may study the same collection but may use their research in very different ways. Mollie’s collection is full of material relating to her work with the labor movement, however she was a very active individual and her collection reflects that. Pictures, letters, papers, and cards show just how many people Mollie knew and all the activities she was involved with. 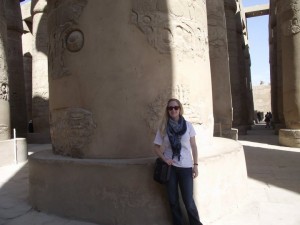 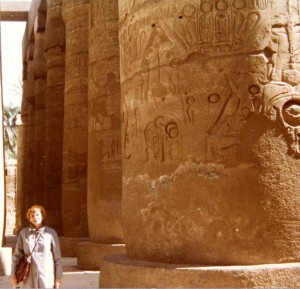 Looking through Mollie’s collection, I thought about how I had tried to capture my time traveling abroad. Mollie’s photos seem to indicate that she often traveled with friends and family. There are numerous pictures of her by herself as well as her with the people she presumably traveled with. I on the other hand, took several solo trips so a majority of those photos consist of the landscape, buildings, and other people. I am envious of the plethora of candid photos of Mollie and her traveling companions. These photos are very natural and they give me a better look at how Mollie interacted with the environment and other people when she was not posing for a planned picture.

When Mollie traveled, film was still used, as the numerous negatives in her collection prove. In this day and age there are digital cameras and cameras on phones. Any archival collection of my life in the future would consist of CDs, memory cards, and external hard drives because I rarely print out my photos. I have well intentioned plans to print them out and put them in scrapbooks or albums but the need to do that is not there because I can easily view my photos on my computer. There is something very exciting about holding the actual photograph rather than viewing a scanned image. These were photos Mollie or those she traveled with printed off, looked through, put in albums, or hung up. While the photos I took while traveling are reminiscent of those by Mollie, how we displayed and used them afterwards does differ. Mollie’s collection is the inspiration I need to dedicate some time to printing out physical copies of my travel photographs.

I admire Mollie’s work in the labor movement but what I find most interesting are the parts of her collection that are strongly connected to her personal life. Mollie was such an influential public figure for the labor movement, that it is nice to see what she was involved in outside of that work. Her pictures show time spent with family and friends and traveling. One of the most fascinating things about Mollie is that she traveled the world well into her older age. I only hope that I have the great fortune to travel far and wide, just like Mollie. 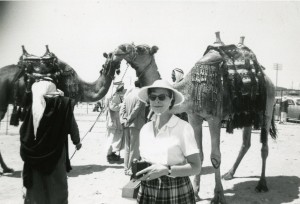