The Women and Leadership Archives has many strengths in its collections. We have many about women who were leaders in activism and environmental issues, and others from women who dedicated their lives to public service, social justice, education, and the arts. In browsing the archives, it is easy to recognize why the papers of these women were chosen to be preserved, but sometimes you come across collections that are not as obvious.

In scrolling through the collections listed on the WLA website, I found the papers of Agatha Rosetti Hessley. Under her name, it simply said “homemaker.” As a woman raised by a stay-at-home mom, I wholeheartedly believe in the value and importance of these women who devote their lives to their families. However, in this list of women and organizations recognized for their public leadership, I wondered what her collection held that the archivist felt would be useful to researchers.

Agatha Hessley was not a politician. Her collection gives no evidence of her participation in any social activism. She did nothing that made her notably influential to anyone other than her own family and friends. She was not an artist, an educator, or an academic.

Yet, her two boxes sit on a shelf in the archives between those of social justice organizations, alderwomen, and college presidents.

This question leads me back to the reason women’s archives like the WLA exist in the first place. Because early archives focused on government and military documents, women and other groups left out of the public sphere were not represented in the historical record. Specialized archives were created to preserve the papers that documented the contributions of women and other marginalized groups. Although Agatha Hessley, like many women of her time, did not have a career outside of her home, she still made a valuable contribution to history and the archives. 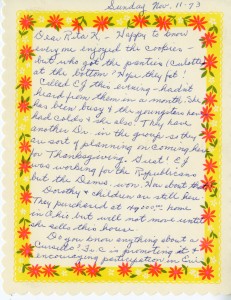 A letter from Agatha to Rita Hessley, found in the Agatha Rosetti Hessley Collection.

Agatha Hessley’s collection offers a unique look into a time of transformation in the United States and the world. Her two archival boxes hold the letters that Agatha wrote to her daughter, Rita, between 1970 and 1993. In them, Agatha describes the major life events of her family and her daily routines. She also gives her perspective on historical events such as Watergate, the 1970’s oil crisis, and the Gulf War. As a devout Catholic, Agatha often wrote about the Roman Catholic Church and her observations of the changes that took place after Vatican II. Throughout decades of great conflict and change, Agatha’s letters offer a glimpse into how these changes affected an average American woman.

Although she may be simply labeled as a “homemaker,” Agatha’s letters reveal her to be an engaging writer. Excerpts from her letters, especially those concerning changes in the Roman Catholic Church, were published in a book in 2005 by MaryEllen O’Brien entitled Living in Ordinary Times: The Letters of Agatha Rosetti Hessley.

As time goes on, the collection of Agatha Rosetti Hessley will continue to provide information and inspiration to researchers. 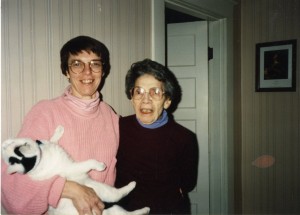 Agatha Hessley and her daughter, Rita, 1994

Caroline Lynd Giannakopoulos is a Graduate Assistant at the WLA and is working on her Master’s in Public History at Loyola University Chicago. When not scrapbooking, she spends her spare time exploring Chicago, interpreting dreams and watching cheesy movies with her husband.