Patricia Caron Crowley was born in 1913 in Chicago, Illinois. She went to school in the city and was very involved in Girl Scouts. In 1932, the summer after Patricia graduated from high school, she was selected to take part in an International Girl Guide Camp. The camp took place in Enniskerry, Ireland. The trip also included sightseeing in England and France. She was one of only ten girls and three guides from America at the camp. Patricia was chosen on merit. Earlier that year she earned the golden eaglet award, which was the highest Girl Scout Honor.

250 girls attended the camp from Ireland, the British Isles, Canada, Australia, India, Finland, Belgium, France, and the U.S. In an essay found in one of the scrapbooks, Patricia wrote that the girls slept on paillasses stuffed with straw. The girls cooked their own food in large swinging iron pots and they ate sitting on ground sheets with flat boards for tables. Patricia observed that camping in Ireland was different than in America and she greatly enjoyed learning the differences in cultures. After the international camp, Patricia traveled to England and France. In total, Patricia spent six weeks abroad touring as a Girl Scout. Almost two full were spent traveling by boat from and to New York. 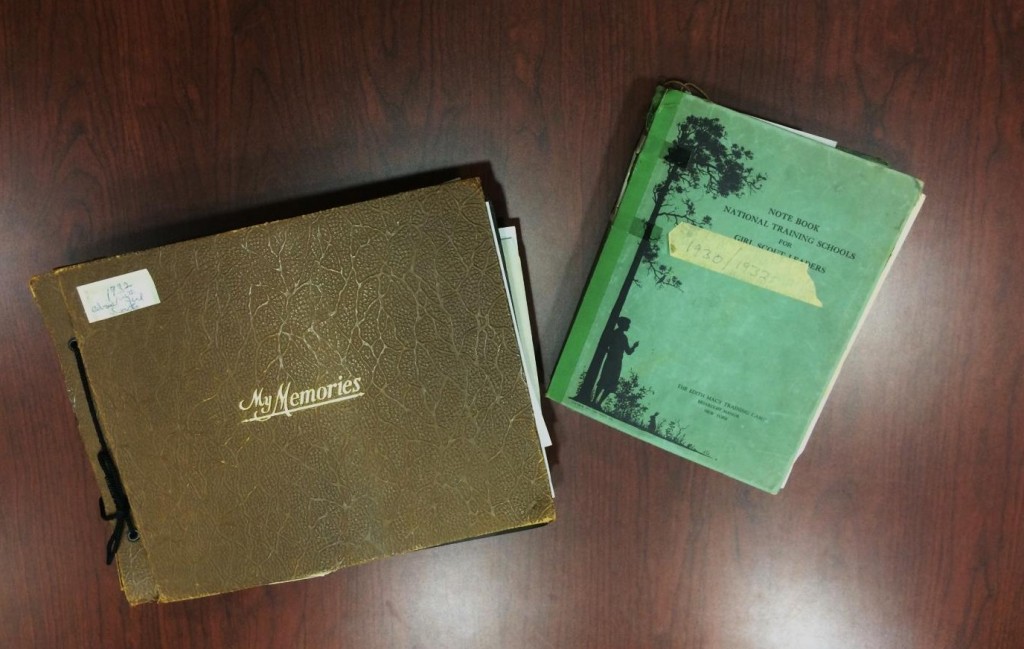 Two of the scrapbooks containing memories of Patricia Caron Crowley’s time as a Girl Scout. The brown scrapbook is from her Ireland trip.

Patricia created several scrapbooks detailing her time as a Girl Scout. She dedicated one full scrapbook to her time abroad for the International Girl Guide Camp. Letters, newspaper clippings, telegrams, photographs, ticket stubs, and postcards fill numerous pages. Patricia extensively wrote about the trip in the Ireland scrapbook. From the content of the scrapbook, Patricia kept most everything from her time abroad, including the menus from the ships she took from and to the United States. Her scrapbooks highlight her time abroad as a Girl Scout but the books also have much broader themes about international travel and culture. 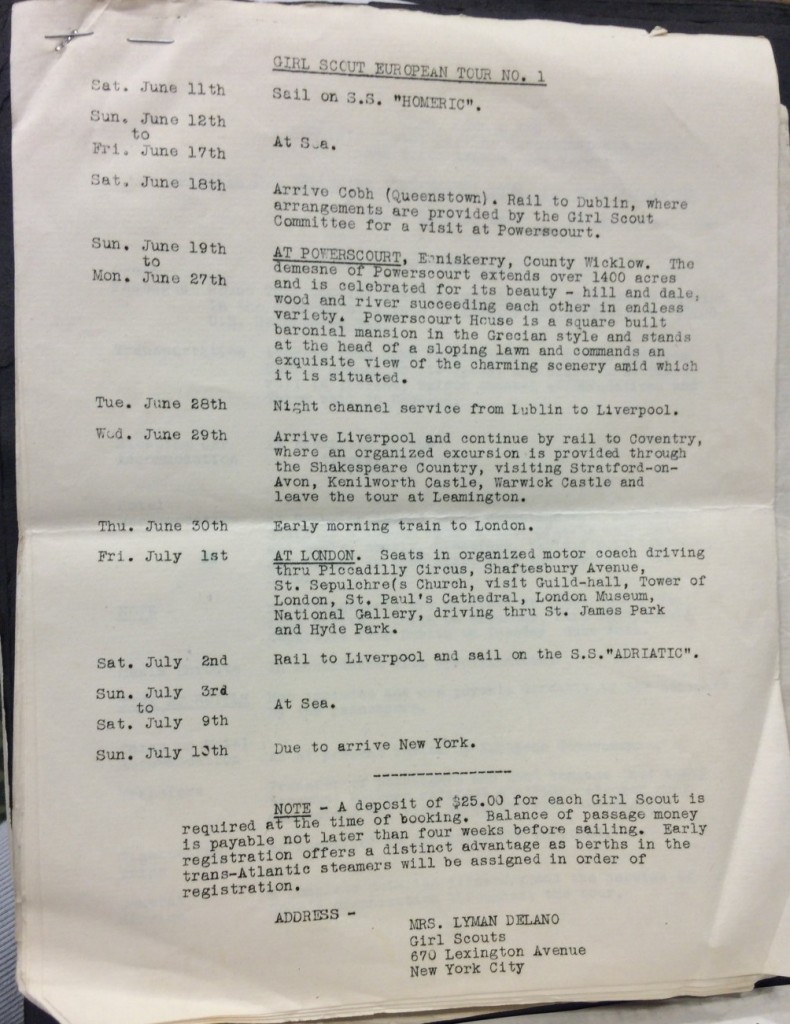 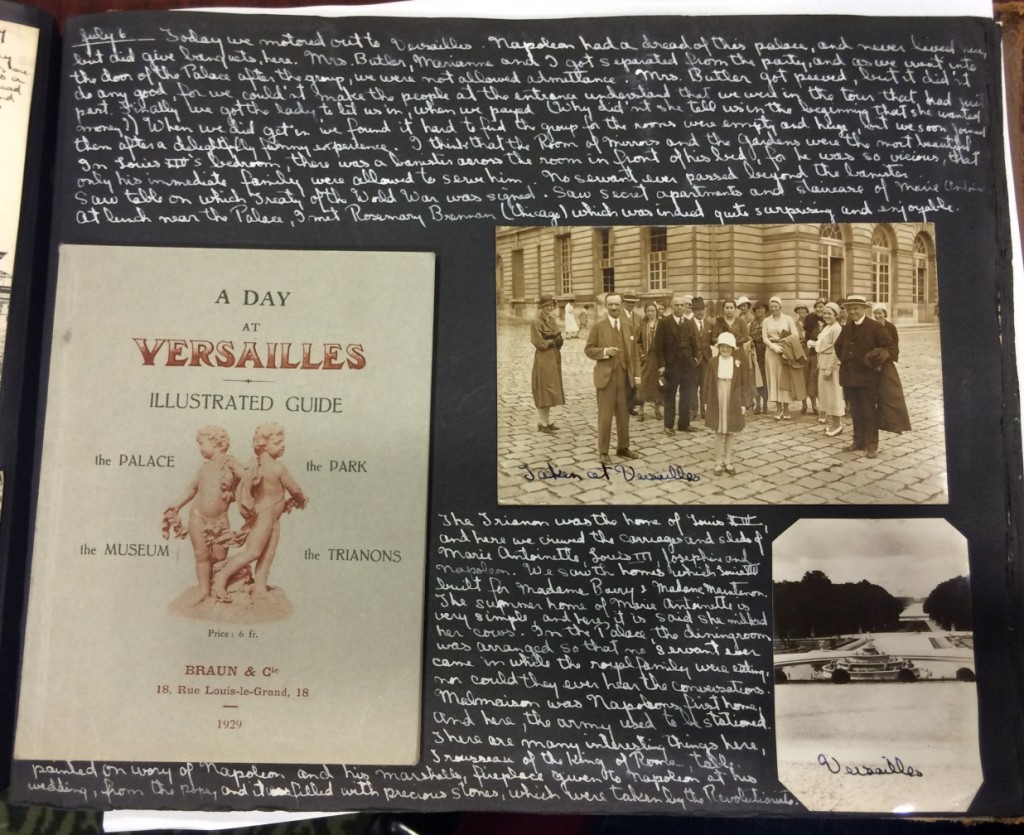 Based on photographs and her journaling, Patricia’s Girl Scout experience was quite different from my own but that is what makes her collection so fascinating. I spent a significant amount of my childhood in the Girl Scouts organization. Patricia’s collection is interesting because she was in Girl Scouts during the early years of the organization. From her detailed scrapbooks I can see how Girl Scouts today has changed and adapted to modern times. Like Patricia, I remember camping, singing songs, and learning life skills. However, in my experience, uniforms were less important and were only worn for very special events. Patricia was expected to have several uniform changes for her trip abroad. In her scrapbooks, Patricia noted a religious aspect to the Girl Scout organization. Many guides had religious backgrounds and the participants of the international camp went to hear several religious speakers. As I remember it, religion played no part in my Girl Scouting experience. 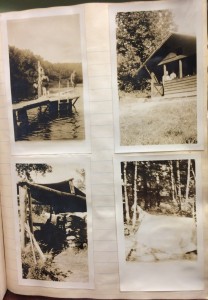 Photos from a scrapbook page showing time spent at a Girl Scout camp in the U.S.

The Girl Scouts organization turned 100 in 2012. Patricia experienced a rare trip that very few other American Girl Scouts ever had the chance to take part in. Her dedication and involvement in the organization when she was young highlights why Girl Scouts still exists today. As the organization moves into the future, Patricia’s collection will become more important to show the early years of Girl Scouts. Her scrapbooks highlight not only Girl Scouts but scouting organizations for girls all over the world. As a former Girl Scout, I hope the organization continues to grow and provide opportunities for girls. Of course, I hope those girls remember to keep as thorough a record of their Girl Scout adventures as Patricia Caron Crowley. Years from now, someone like me might be interested in what was on the menu! 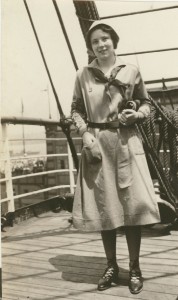 Patricia, in uniform, on a boat during her international Girl Scout trip in 1932 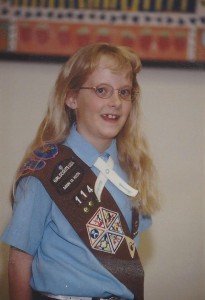 Me in my brownie uniform