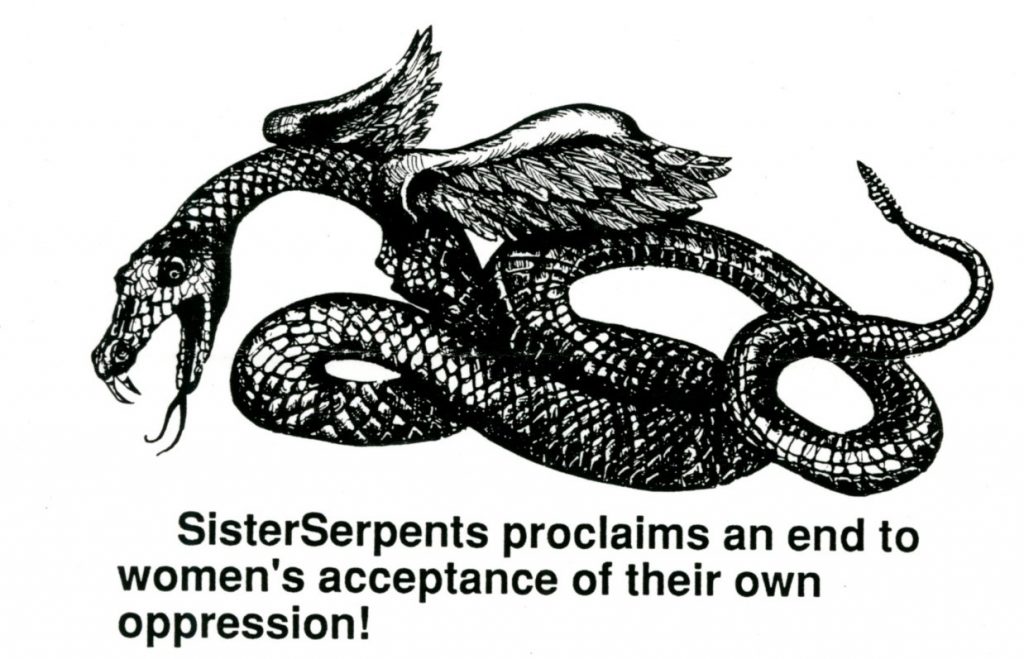 Art is one of the most powerful and important means of communicating that we have as a culture and as individuals. In our collection, the WLA has the records and materials of an organization that used their creativity to fiercely shed light and provoke thought on issues they felt passionately about. SisterSerpents formed in Chicago on July 4th, 1989 and was a group of radical feminist artist-activists, whose mission was to use their art to increase awareness on women’s issues in society. In their own manifesto, they declared themselves “dedicated to working cooperatively to combat patriarchal attitudes through cultural means.” To achieve their goal they utilized guerilla-style tactics, placing provocative posters, and neon-colored stickers with their messages all around Chicago. 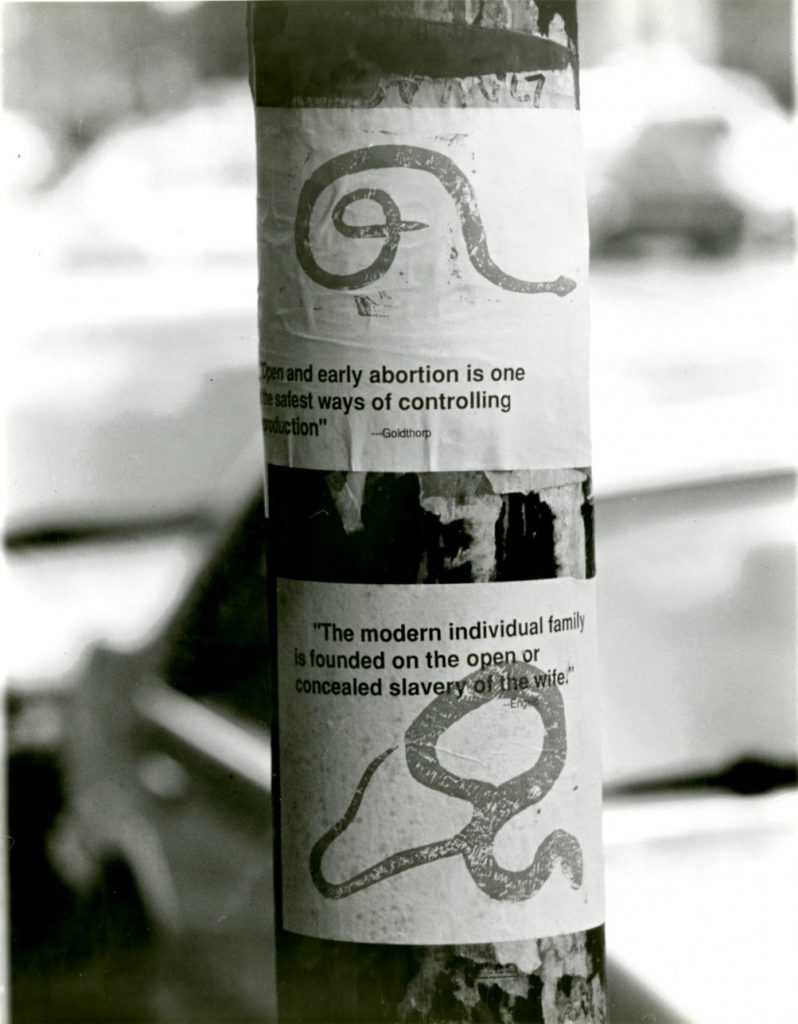 SisterSerpents poster on a street lamp, 1991 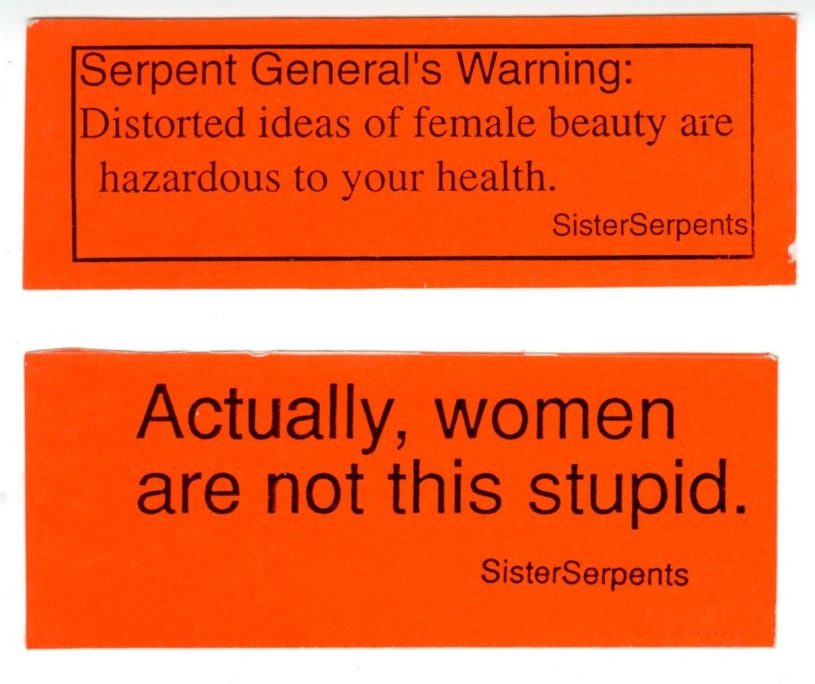 Stickers for placing on advertisements and products

SisterSerpents also held art shows, exhibitions, and performances. They organized panels and discussions, wrote letters to the press, and printed their own journal, MadWoman. Participation in the art collective was largely anonymous, though a few of the founding members – Mary Ellen Croteau and Jeramy Turner – showed some of their independent work as well as the pieces they created collectively. 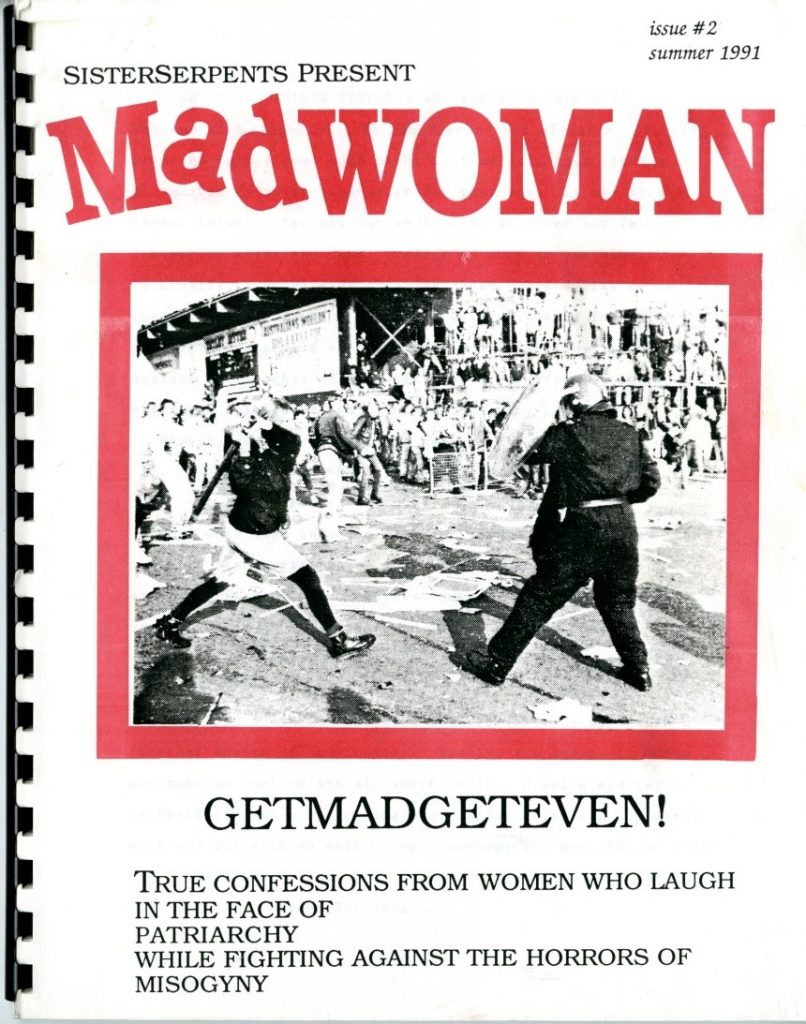 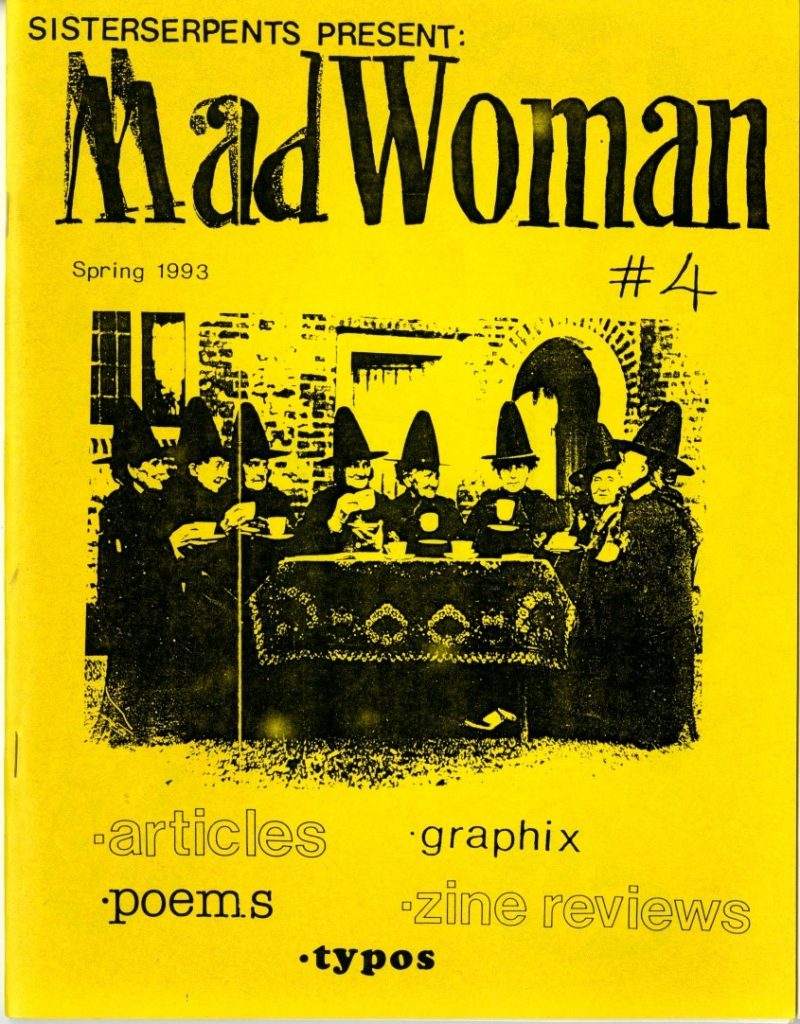 Their work explored a wide range of themes important to women, including traditional roles of homemaker/mother, rape and violation, misogyny and subversive messaging in the media, power struggles in relationships, body image, the stigmatization of emotions, and barriers in the workplace. SisterSerpents shows and works were provoking, angry, humorous, and challenged cultural and gender standards. They had showcases with titles such as “Rattle Your Rage” and “Piss on Patriarchy” that ran in cities like Chicago, Denver, New York, and Berlin. SisterSerpents did not pull punches when it came to expressing their beliefs, and their exhibits often sought to shock with violent and explicit imagery and themes. While their work garnered some acclaim, it also led to controversy and opposition. For example, in 1990 the American Family Association protested one of their shows that included a “fetus wall” which contained stylized photographs of fetuses and sought to challenge ideas about abortion. For their “Rattle Your Rage” show, a newspaper quoted SisterSerpents with the following:

“We wanted to have a women’s show that wasn’t polite or nice, one that expressed angry attitudes. You know, a lot of women’s art is very decorative and aesthetic. This is not just giving women a voice, but it’s using art as a way of taking a stand. We wanted it to be threatening. We wanted people to be upset. Jolted. And to realize that there’s all kinds of hostility coming from women that’s going to take all kinds of forms.” 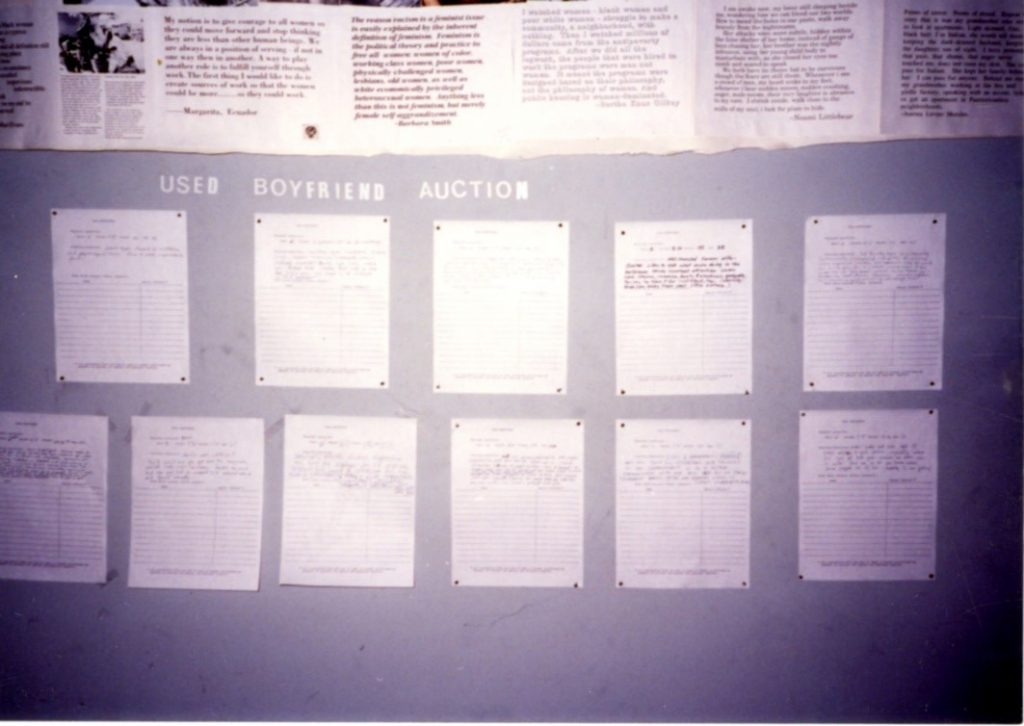 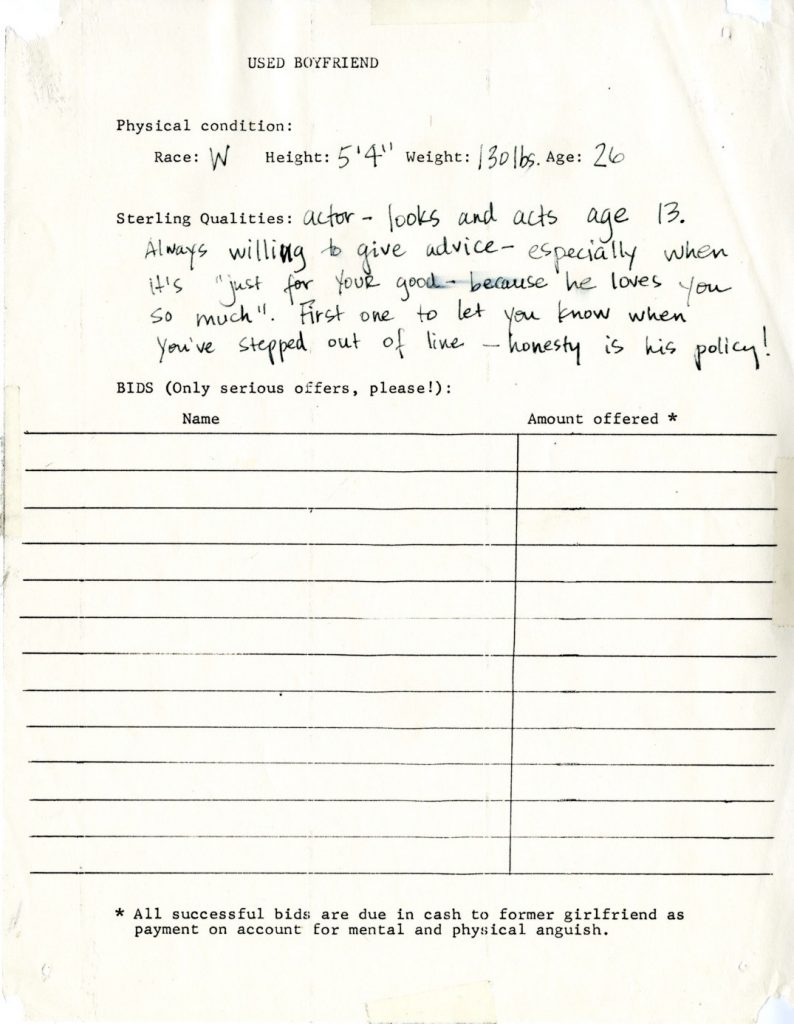 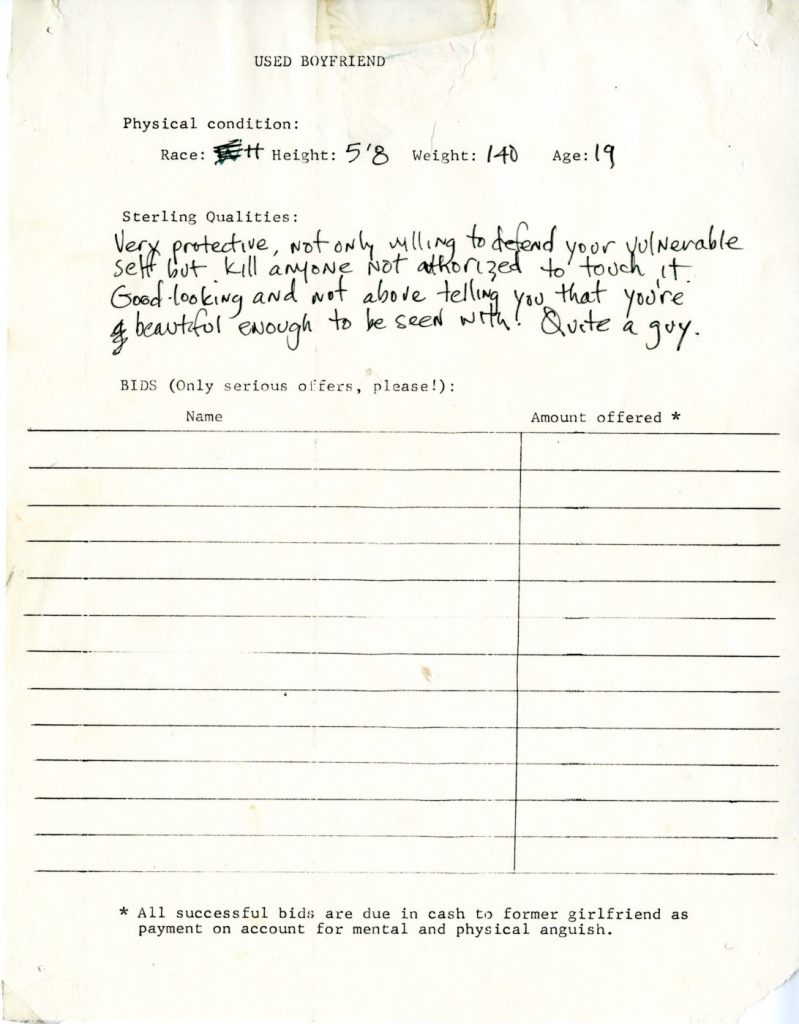 One of SisterSerpent’s art installations, “Used Boyfriend Auction”, highlighted struggles of power and misogyny in relationships

SisterSerpents remained active until 1998, and their significance was cemented with the inclusion of several of their posters in the Smithsonian’s Cooper-Hewitt National Design Museum’s permanent collection. They were undoubtedly controversial. However, regardless of politics, I think one must admire SisterSerpents tenacity and creativity in funneling their passion and anger into art, and then using it to contribute to bigger goals. Working in their collection, I was struck by how they were able to use their art as a means to participate in political conversations.

During the summer months when I have more time, I enjoy tapping into my creative side and one of the ways I express myself artistically is through knitting. Learning about SisterSerpents inspired me to want to do more with my own creative endeavors, and so I researched ways I could use my needles to contribute to social issues. If you’re a knitter like me, I encourage you to check out the Red Scarf Project and find out how you can use knitting to encourage foster youths entering college.

Kate is a Graduate Assistant at the WLA and in the first year of her M.A. in Public History at Loyola University Chicago. A Colorado gal, she enjoys classic films, bike riding, and all things museums.