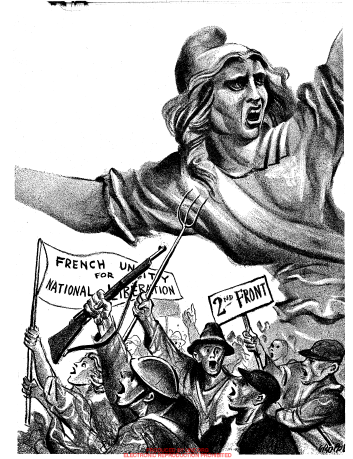 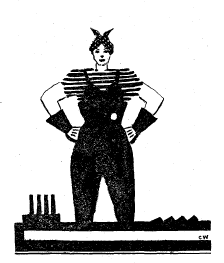 An illustration by William Gropper, inspired by the imagery of the French revolution, appears in this article by Eva Lapin. The article addresses the active of role women in industry and the sacrifices made in order to balance domestic obligations and public roles in factory work. In contrast, the women in Gropper’s illustration are employed solely as allegorical symbols for abstract social concepts; they are not actually part of the revolution, but embodiments of ideas. A small illustration of a “factory girl” near the end of Lapin’s article redeems the spread. Although the image is simple, and its authorship unclear, the female worker matches the tone of the article much more effectively. Unlike Gropper’s Liberty, who sports a Phrygian cap and Roman toga, this woman is rooted firmly in the 1940s; wearing a bandanna, overalls, and work gloves, she appears prepared and willing to work. The “factory girl” serves as an intriguing alternative to the precedent set in New Masses for depicting women workers as exploited victims.