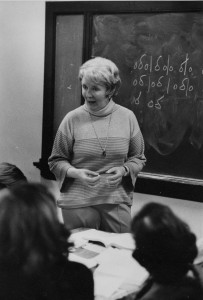 Mary Griffin was born Agnes Marie Griffin in 1916 in Chicago, IL. She received a Bachelor’s of Music Education at Mundelein College in 1939. Griffin entered the Sisters of Charity of the Blessed Virgin Mary (B.V.M), after graduating from Mundelein and took her final vows in 1942. When she entered the order, she took the name Sister Mary Ignatia. She taught English at the Saint Joseph Academy in Dubuque, Iowa and two years later became an instructor of Music and English at Clarke College in Dubuque, Iowa. Griffin obtained a Bachelor’s degree in English from Mundelein College in 1947 and pursued graduate studies in English at the Catholic University of America and Fordham University, earning a Master’s (1951) and PhD (1957) respectively.

Griffin, as both a professor and a feminist, became a leader for innovation in education practices. After completing her doctorate, Griffin served as the Academic Dean of Mundelein College where she had previously been a Professor of English. During her seven years as Dean, Griffin made substantial improvements to the curriculum including introducing a three term calendar, new majors, and interdisciplinary seminars. Griffin also increased the size of the facility at Mundelein and established affiliations with other universities. She organized inclusive educational programs such as the Weekend College in 1974, which allowed working adults to complete their degrees attending school on the weekends, and a Master of Liberal Studies Programs in 1983 which provided an in depth liberal arts education. Both of these programs became highly regarded and considered exemplary by other universities across the country. 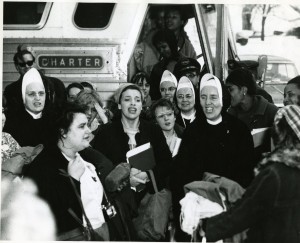 What set Griffin apart as an educator was her dedication to addressing social concerns inside and outside the classroom. During the 1960s, she brought students from Mundelein College to Selma, Alabama, to participate in the Civil Rights Movement and taught for three years (1970-1973) at historically black Alcorn College in Mississippi. In the 1970s, she became involved in the nascent Feminist Movement, serving on the National Task Force Board of the Equal Rights Amendment and the Legal Defense Fund of the National Organization of Women.

Influenced by the social and cultural changes of the 1960s and 1970s, Griffin chose to leave religious life in 1973. Writing a well-received book, entitled The Courage to Choose,
she explained her decision to leave the order, “what matters is not that we never change a commitment but that it remain meaningful, growth-producing. When this is no longer the case, we must have the courage to move on.”

Griffin continued to teach at Mundelein College and later, Loyola University Chicago as a Senior Professor of English, until her death in 1998. Mary Griffin’s dual role as an educator and advocate for social justice is a large part of her legacy.

The Mary Griffin Papers at the Women and Leadership Archives (WLA) span the period 1961-1998. The records contain biographical information, correspondence, publications, papers, photographs, awards, and certificates. The collections at the WLA include many women educators and social justice advocates, for a full list of these individuals see our website.