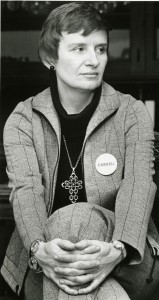 Carolyn Farrell after being elected to the Dubuque, Iowa City Council, 1977.

Carolyn Farrell, B.V.M., was born in Des Moines, Iowa in 1934.  In 1953 at the age of 18, Farrell joined the Sisters of the Blessed Virgin Mary (BVM), taking her final vows in 1961.  She received her B.A. in History from Clarke College in 1966 and went on to attain a Master’s of Science in Education Administration from Western Illinois University.  Farrell also completed post-graduate work at the University of Iowa in Administration of Higher Education and at the Hubert Humphrey Institute for Public Affairs at the University of Minnesota.

After holding positions as a teacher and administrator for a number of years, in 1974 Farrell began serving on several public committees in Dubuque, Iowa.  It was during this time that Farrell realized she wanted to become involved in politics.  She ran for Dubuque City Council in 1977 and became the first woman to be elected for a four year term.  In 1980, Farrell was elected for a one year term as the Mayor of Dubuque, becoming the first woman religious to serve as a mayor of a city in the United States.[1]

The following year Farrell returned to her former position as the Director of Continuing Education at Clarke College, a position which she held until 1988.  In 1991, Farrell accepted the Interim Presidency of Mundelein College in Chicago where she oversaw the College’s affiliation with Loyola University Chicago.  Farrell went on to serve as Associate Vice President of Loyola University for Mundelein College and Associate Vice President and Director of the Ann Ida Gannon, BVM, Center for Women and Leadership. Farrell retired from Loyola University Chicago in 2006 and continues her work as Director of the Roberta Kuhn Center at the BVM Motherhouse in Dubuque, Iowa. 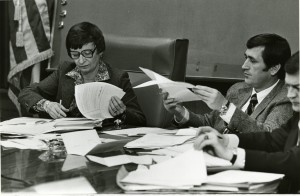 Farrell’s election to office and her service to the field of higher education is a testament to the drive and influential capacities of both women and women religious. Her prominent place in Women’s History is reflected by her attendance at the United Nations 4th World Conference on Women in Beijing in 1995.

The Carolyn Farrell, BVM Papers at the WLA consists of 13 linear feet and document Farrell’s professional life with the majority of her papers spanning from 1977-1996. Additional papers at the WLA of women involved in politics include the Carol Ronen Papers, the Sheli Lulkin Papers, the Mary Ann Smith Papers, the Marion Volini Papers, and the Carol Mosley Braun Papers (currently unavailable for research).  The WLA also has the papers of over a dozen BVMs and 25 women religious or former women religious.  See our website for a full list of these collections.

[1] Dubuque, Iowa operates under a council-manager form of government, whereas the mayor is elected by the city council from among its members.