For many of us, at this time of year our brains are filled with dreams of upcoming vacations and holiday celebrations. As I pondered this month’s blog post, the sugar plums danced in my head, distracting me from finding an archives-related topic.

My brain then latched on to Christmas traditions and hit pay dirt. I immediately thought of the Candle Lighting ceremony at Mundelein College and quickly realized how records of that event provide insight into societal changes. This post is not about Christmas. Instead, it’s about looking at photos and programs of a long-running event and analyzing the records to see societal trends and changes over the years.

The Women and Leadership Archives (WLA) largest collection is the records of Mundelein College. Founded in 1929 by the Sisters of Charity of the Blessed Virgin Mary (BVMs), Mundelein provided education to women until 1991 when it affiliated with nearby Loyola University Chicago. The Candle Lighting ceremony occurred at Christmastime from 1930-1991, making it a long running Mundelein tradition.

I find traditions fascinating. While perhaps a tired literary technique, I looked up the definition of the word. Tradition is “an inherited, established, or customary pattern of thought, action, or behavior (as in religious practice or a social custom.)” Well said, Merriam-Webster.

A tradition may change or shift over time in conjunction with societal changes. The fundamental meaning and purpose of the tradition remains; how it is carried out often changes, depending on what is happening in the world at large. Nothing occurs in a vacuum.

Mundelein’s Candle Lighting ceremony spanned 60 years and began the first year of classes and ended when the College affiliated with Loyola.  Photos and programs from the Candle Lighting provide historical snapshots of moments in time and give insight into societal changes. First, information about the ceremony and tradition itself and then, with pictures and programs, a historical journey through the 60 years.

The ceremony involved lighting candles in the windows of Mundelein College to form a nine-story cross, symbolizing the Light of the World. Mundelein College’s main building is on Sheridan Road and lighted windows were sure to be noticed on a major thoroughfare.

Another part of the ceremony included Christmas caroling in a procession led by seniors. Students sang as they moved down through the building by floors. Once on the first floor, participants put wreaths at the main entrance, recited the nativity story, and lit a large school candle at the end of the ceremony.

Programs, photos, and newspaper articles from the Skyscraper (Mundelein’s student newspaper) show changes in the ceremony. The first year did not include the large cross in the windows and only the choir sang in the ceremony. Several years later the candle procession included all students.

Now to the historical journey, noticing dates and subsequent shifts in the ceremony that highlight societal changes and trends. The first Candle Lighting occurred in 1931. There are no photos in the records, only a torn program. Note the College clubs involved. 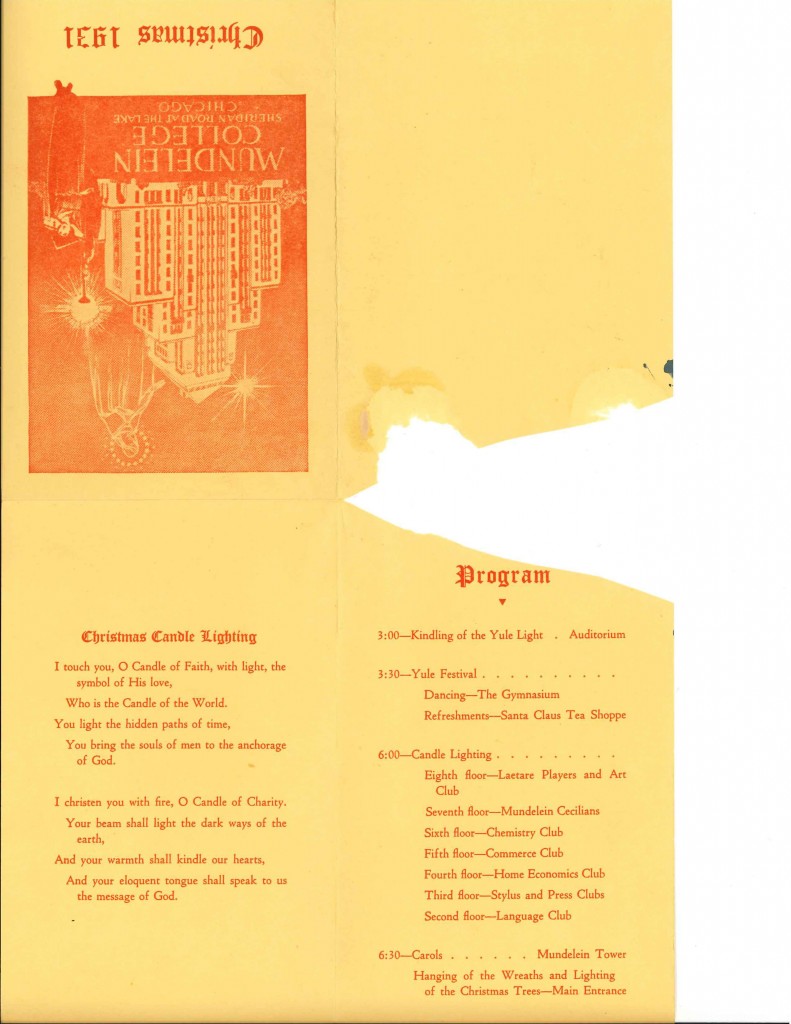 The earliest photo of the ceremony is from 1936. Look at those dresses! 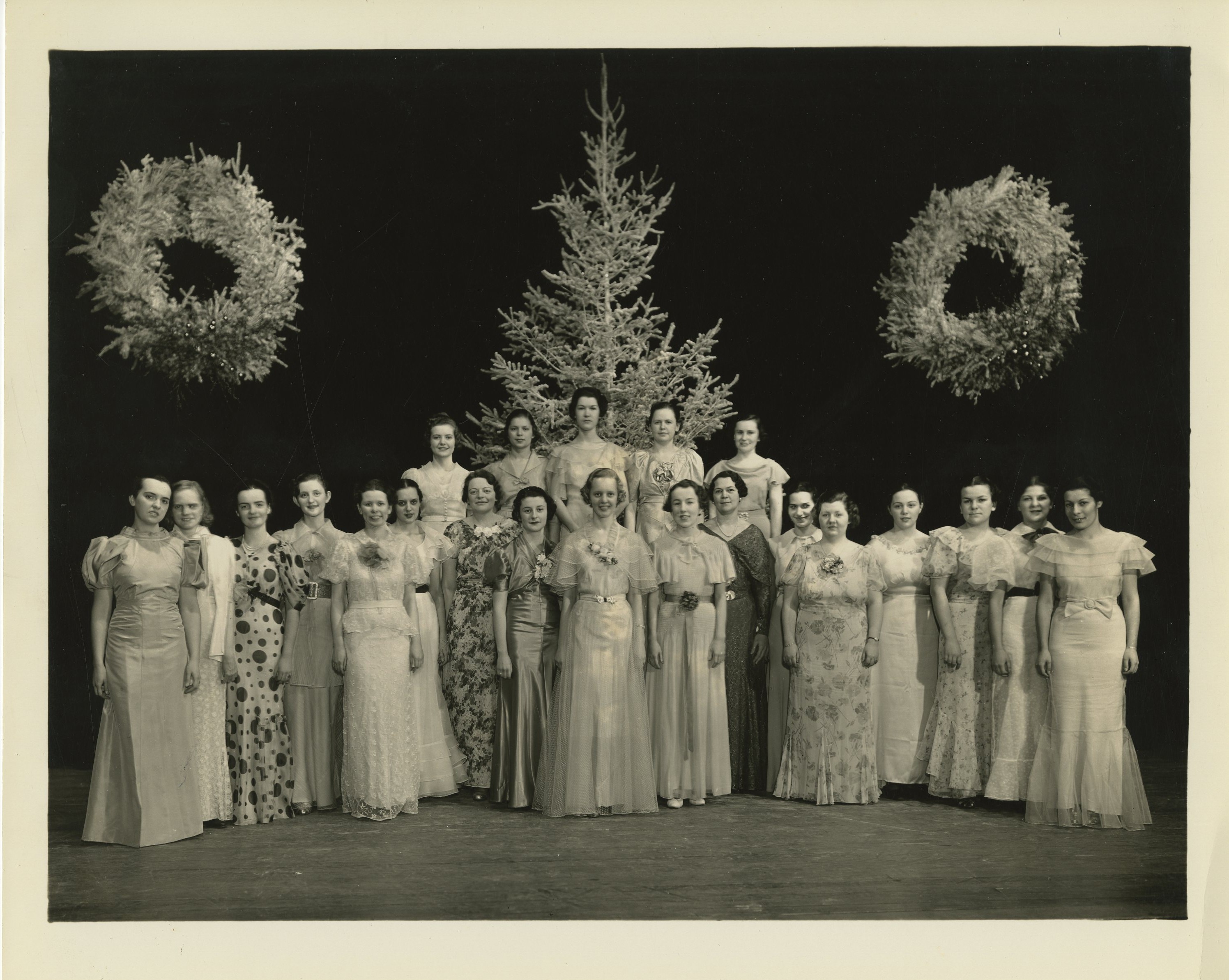 Due to WWII, the 1943 ceremony included recognition of the war.  Four angel sentinels held scrolls of the names of active and deceased servicemen who were relatives of friends of faculty and students. 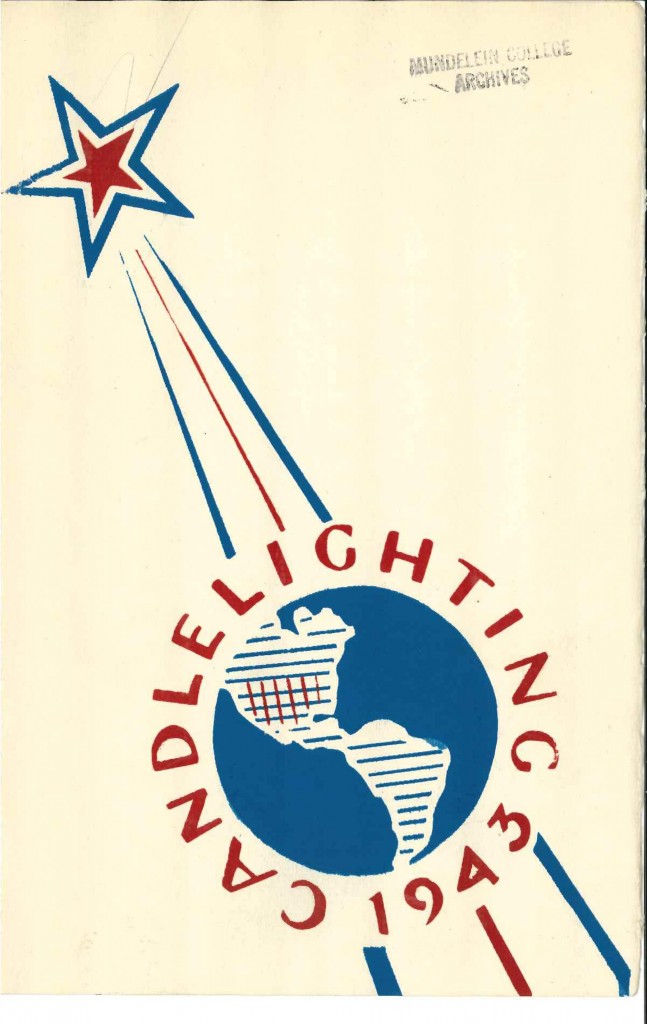 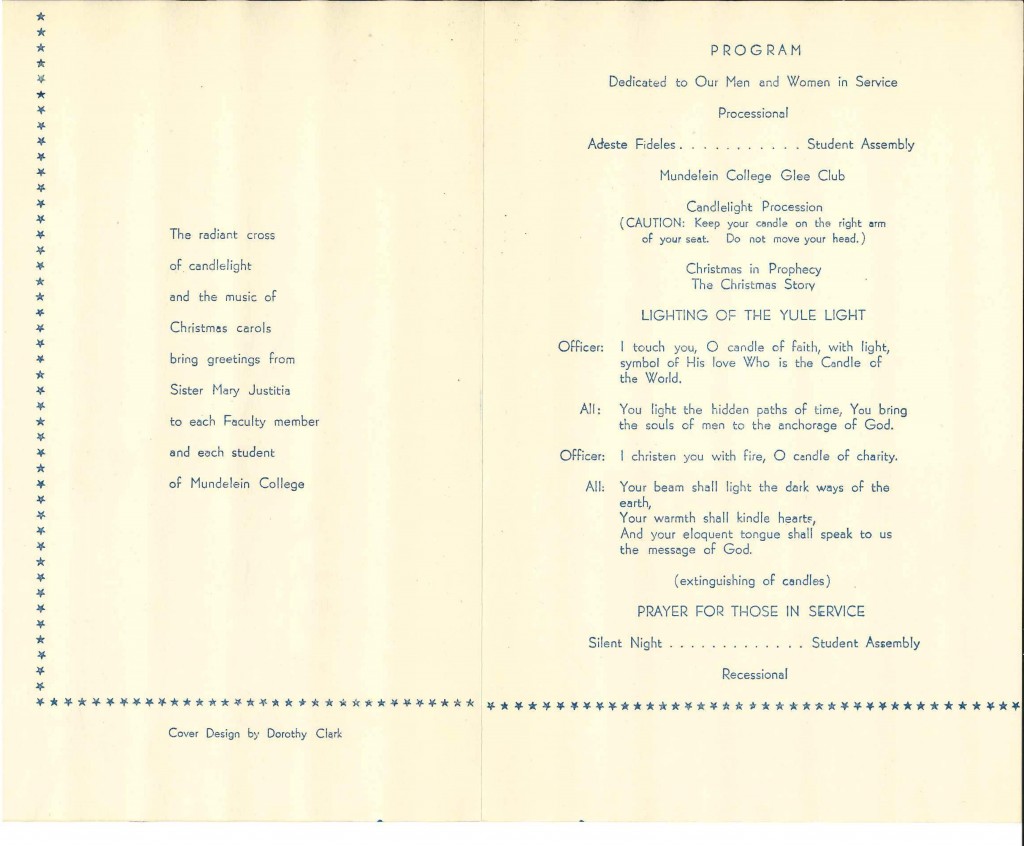 1957 is a year the WLA has both a photo and a program. Look again at the number and type of student organizations involved. 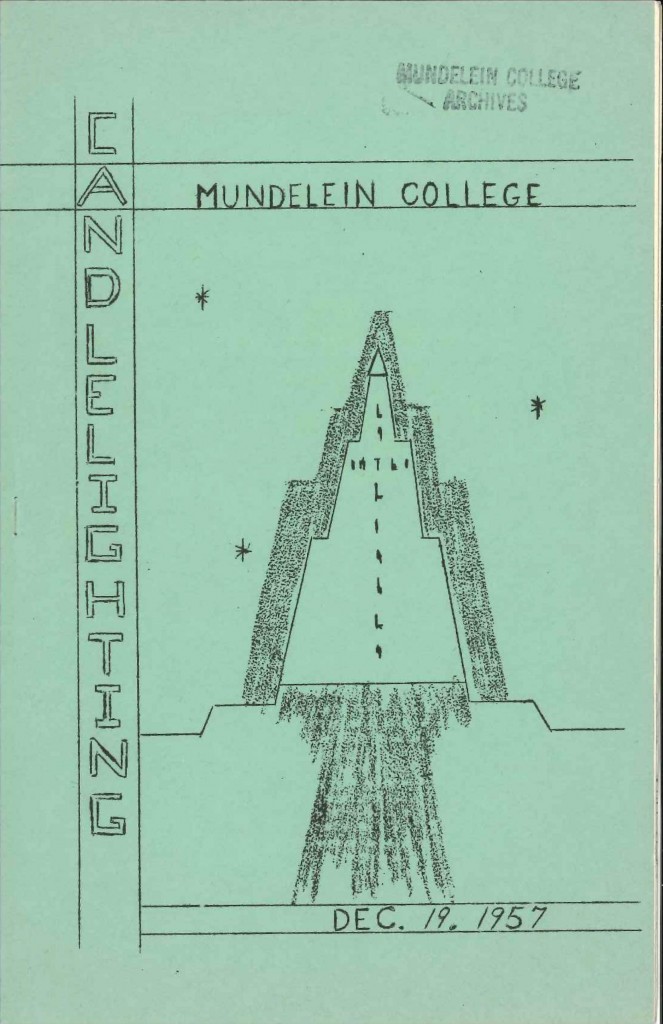 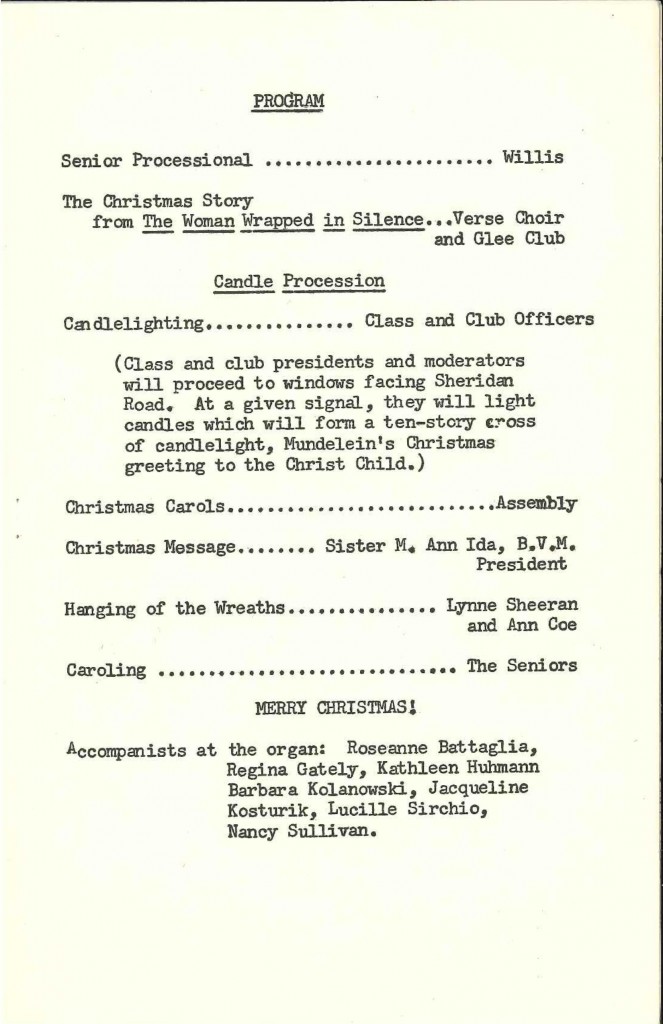 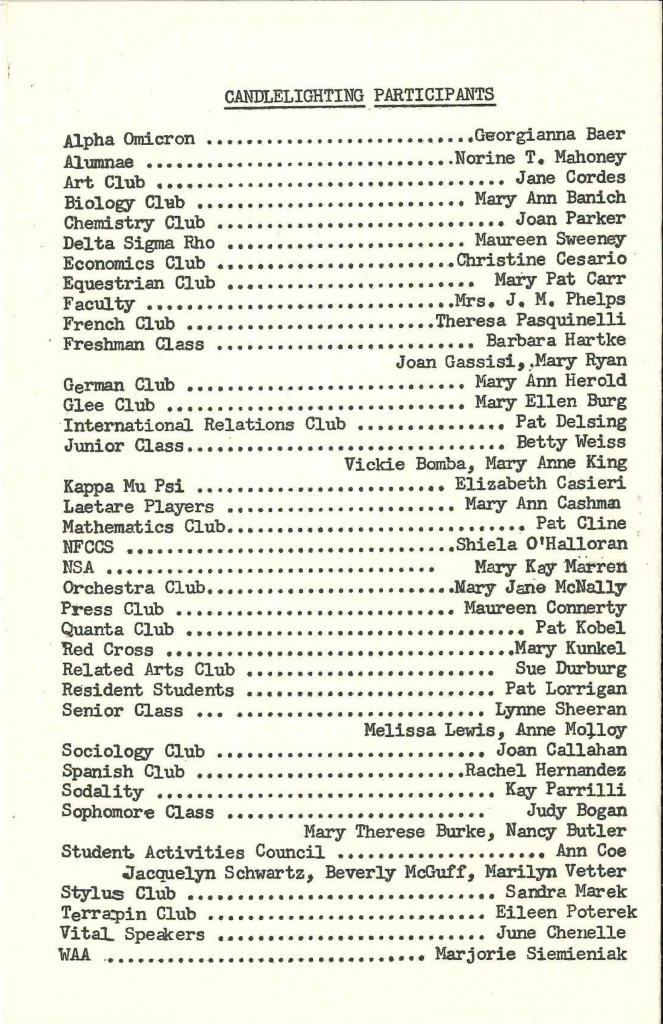 The 1960s were a time of huge change in the world and one of the milestones is Vatican II. The Second Vatican Council (informally known as Vatican II), occurred from 1962 through 1965 and affected many aspects of the Catholic faith, in addition to reverberating through other faith traditions. See here for more info on Vatican II. https://en.wikipedia.org/wiki/Second_Vatican_Council

One major change from Vatican II involved the form and content of masses, the term for Catholic worship services. Masses now used English rather than Latin and could include different types of music and artwork.

As I previously said, nothing occurs in a vacuum. The 1966 program artwork is quite different from the one in 1957. In addition, the Candle Lighting ceremony of 1966 included an interpretive dance piece. Both the artwork change and inclusion of interpretive dance in the mass are a direct result of Vatican II changes. 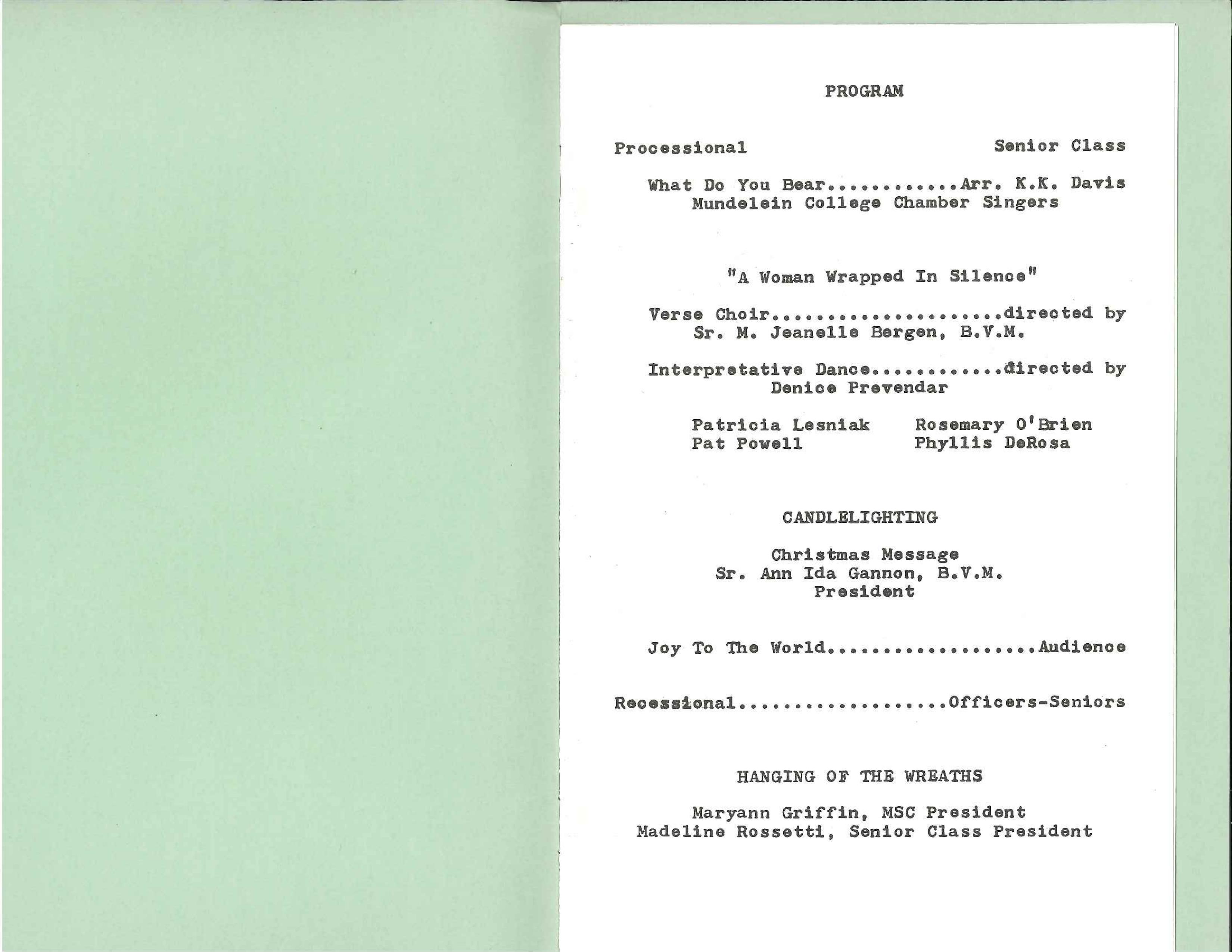 By 1972, it appears the Candle Lighting Ceremony moved to McCormick Lounge in Coffey Hall, Mundelein’s main dormitory building. McCormick Lounge’s floor to ceiling window faces east to Lake Michigan and in the photo, the ceremony takes place in front of the window.

The ceremony is clearly more casual in contrast to the beautiful dresses and robed choir formality of earlier years. Notice the student in her pajamas, robe, and fuzzy slippers. One of the last photos of the ceremony is from 1989. This photo shows the ceremony layout in McCormick Lounge. The program again lists student organizations and provides an interesting comparison to previous documents. 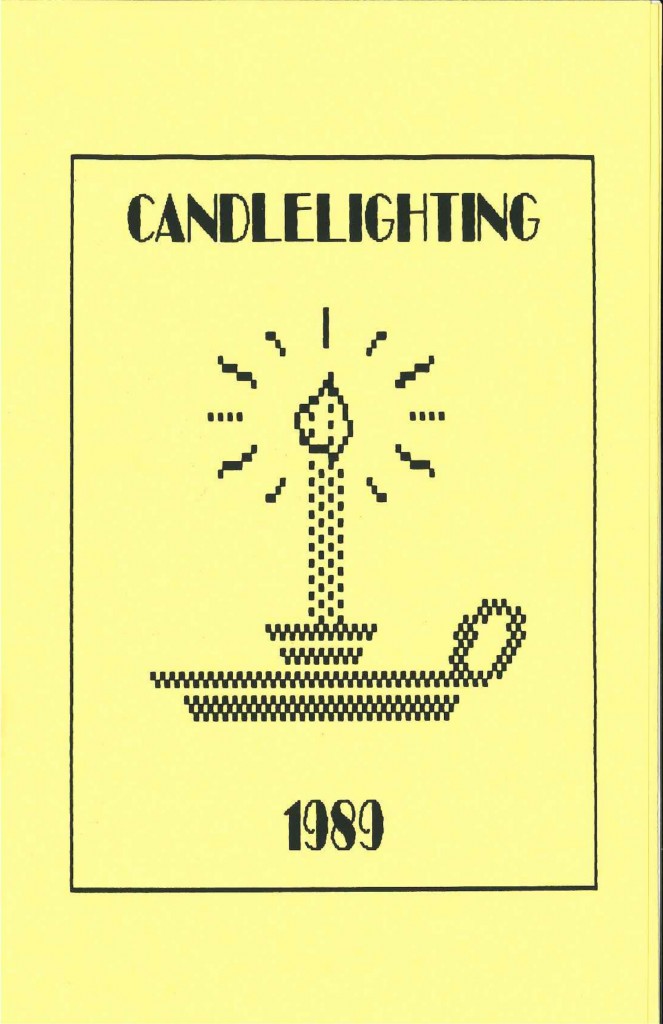 By 1991, Mundelein experienced financial problems and declining enrollment that led to affiliation with nearby Loyola. One final Candle Lighting Ceremony occurred in December of that year with the theme “A Common Past, A Common Future.” 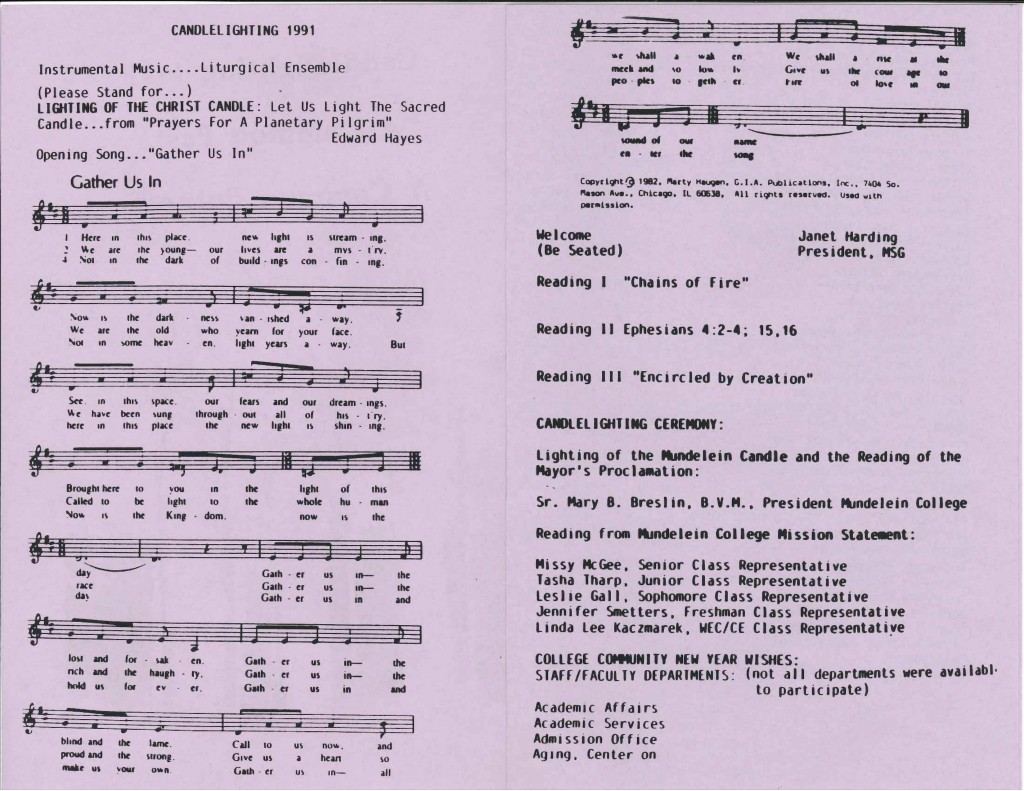 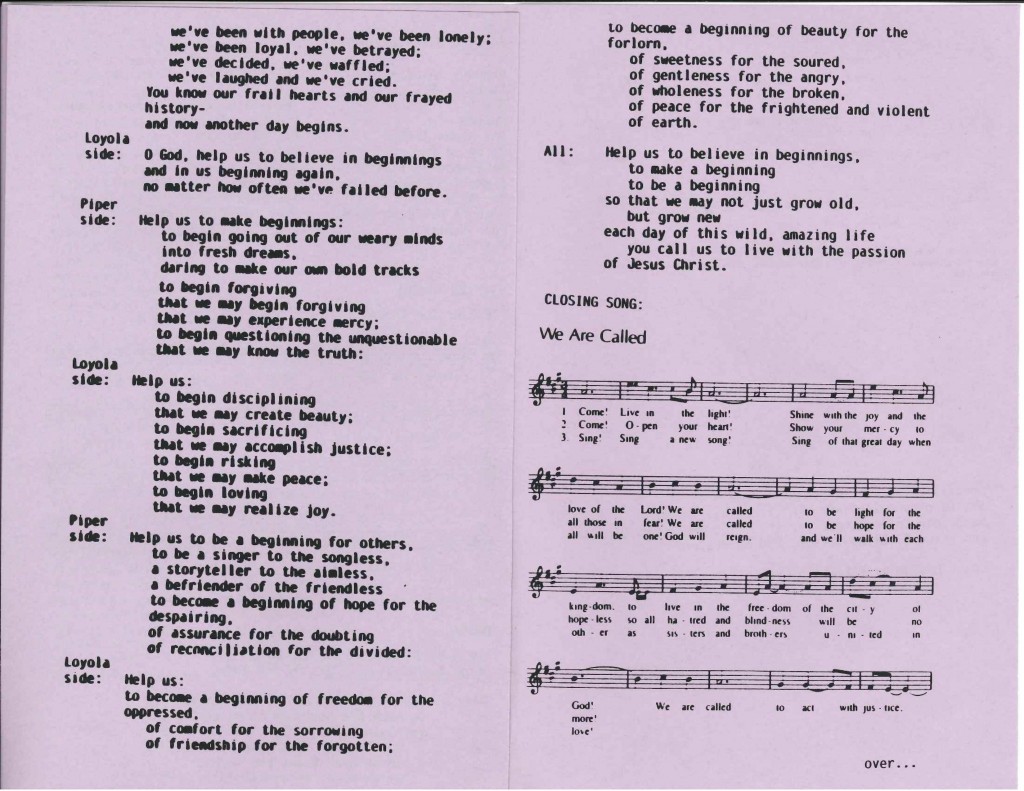 Documentation of a ceremony or tradition provides fascinating information on everything from fashion to world events. Photos and program from the long-running Mundelein College Candle Lighting ceremony are historical snapshots; windows in time that provide opportunities to view societal changes.