Lo and behold, a news clipping from December 14, 1941, described a party thrown by Mundelein clubs for children at Angel Guardian Orphanage, along with recipes that Home Economics students developed for the event. Intrigued by a mysterious recipe titled “Christmas Jewels,” I began investigating what this recipe can say about Mundelein in 1941. 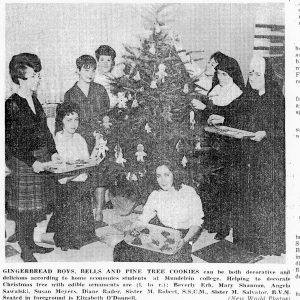 Image: Students and sisters at Mundelein decking their tree with cookies in 1941.

Mundelein’s Home Economics program began in the 1930s, during the Great Depression. The program aimed to train young women for lives as discerning and thrifty consumers and managers of their households, with an understanding of current nutritional standards to feed a healthy family. Over time, the focus shifted. After World War II, consumer science and products became an even greater focus, with field trips to Chicago department stores like Marshall Field’s and experimentation with labor-saving devices and ingredients. The 1950s focused more on being a good hostess in a time of plenty, while in the 1960s the Space Race introduced new topics of study, including nutrition in space! By the 1970s, the program was increasingly scientific, focusing on preparing students to continue in medical programs elsewhere to become RDNs—Registered Dietitian Nutritionists. 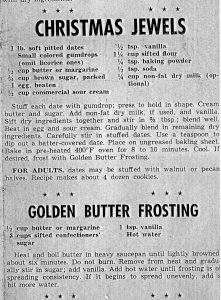 Luckily, I happen to have my own personal RDN- my mom! She completed her RDN degree at the University of Illinois in 1980, and I thought she might have some insights into nutrition through the ages, so she agreed to help me resurrect Mundelein’s Christmas Jewels and provide some nutritional advice! 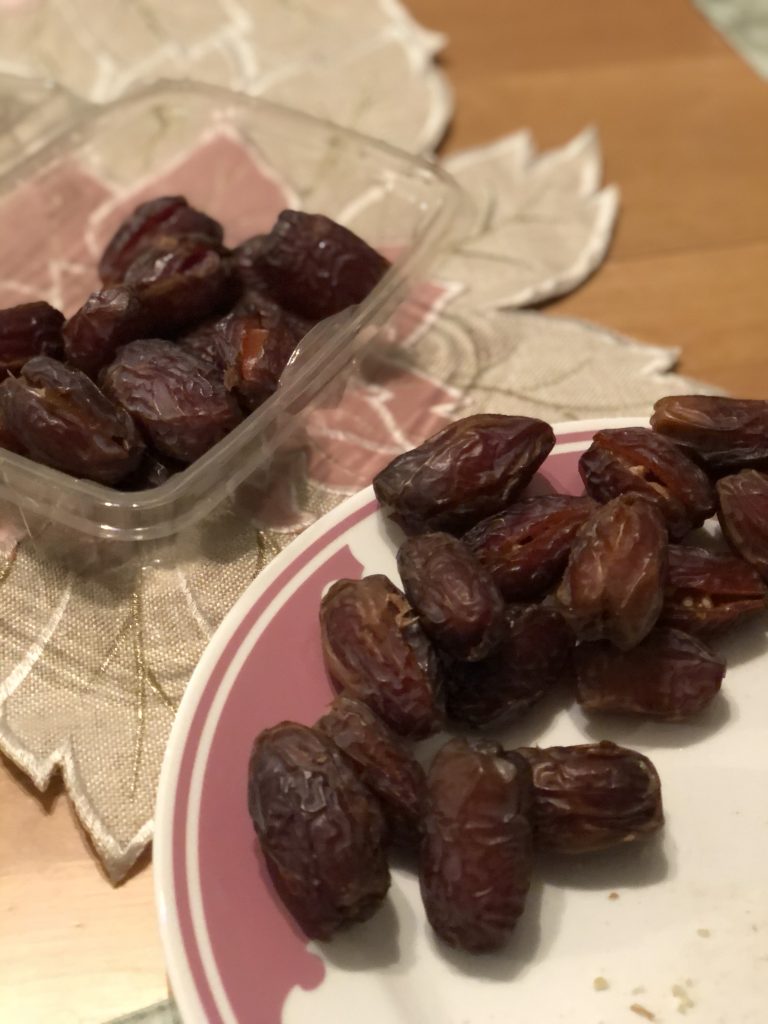 The opposite of bad dates!

We put on the Great British Baking Show playlist and got to work, pitting and stuffing dates, which was actually relaxing. The gumdrops were large and had to be cut into quarters to fit inside the dates, while the walnut halves “for adults” were easier to manage. Dates were popularized in the U.S. during the 1920s by California growers, alongside the craze for films set in the Near East, including The Sheik and One Thousand and One Arabian Nights, though later Indiana Jones and the Raiders of the Lost Ark made them memorable. Rest assured; these were not ‘bad dates.’ 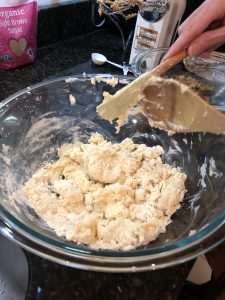 To start the batter, the recipe calls for margarine. My mom was surprised they even had margarine (which apparently dates to 1869!). Her rule, from her RDN education and practical experience, has always been that less processed is best, something the Mundelein students were less concerned with in an age of new, processed food products. Following my RDN’s advice, we traded the highly processed margarine for some organic butter. In her words, it’s a cookie, after all; it’s not going to be truly healthy, so go for butter.

In December of 1941, this recipe sits at an interesting spot between the Great Depression and World War II; the U.S. had only just entered the war a week earlier on December 7, following Pearl Harbor. Rationing would only begin the next summer and would have affected both butter and margarine, and likely other ingredients like the dates and sugar. But the Depression put other pressures on this recipe—my research suggested that during the Depression, brown sugar was cheaper than white sugar, though I still went for light brown sugar—dark felt too decadent. 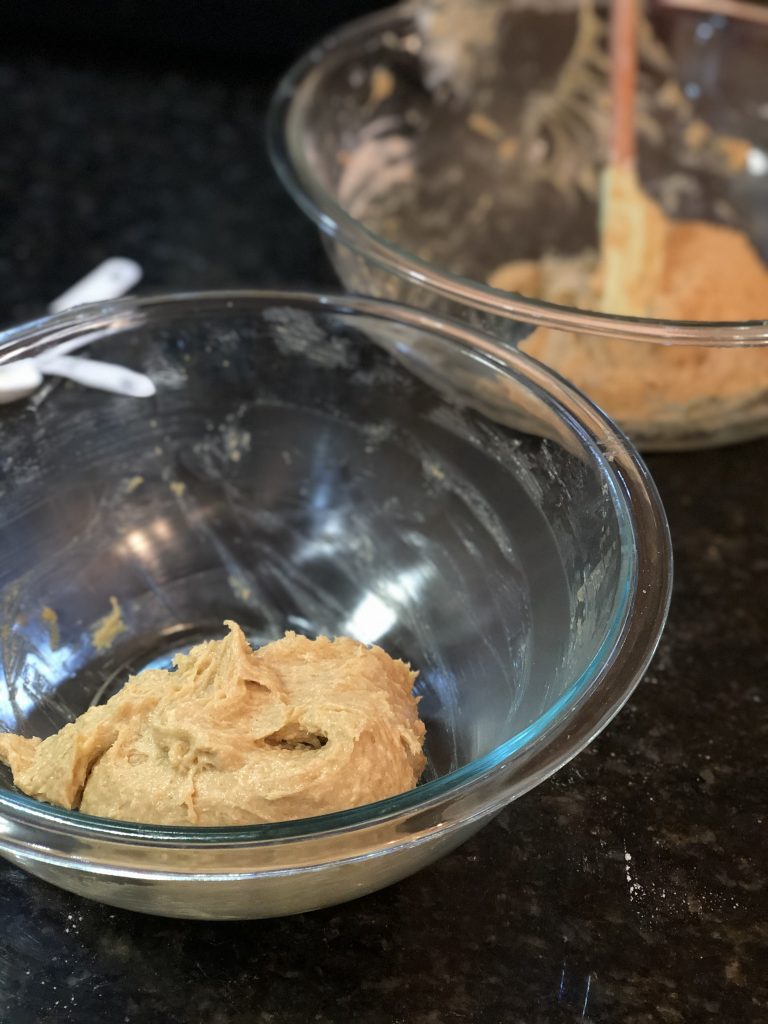 Batter divided in half!

Apart from the mysterious typo (“stir in 2/3 tbsp” of what?), things proceeded smoothly with the dry ingredients, into which we stirred one beaten egg and “commercial” sour cream—what a relief to not have to make my own! According to the article, the added egg makes this recipe healthy, so parents don’t have to worry about their children getting enough nutritious food during the holidays. My mom laughed. One egg stretched over a whole batch of cookies? Compared to all that sugar?

Everything went together to form a very tasty batter, which we split in half. Into one half went the gumdrop-stuffed dates, and the other the walnut-stuffed ones. After much tossing, and anxious wondering about what on earth this would look like when baked, we spooned them out onto baking sheets and baked them for ten minutes. 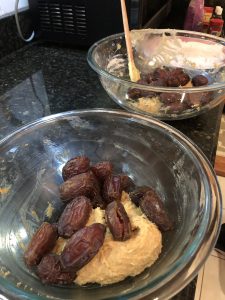 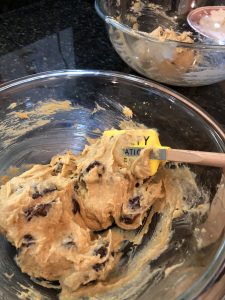 [More mixing and arranging for the oven…]

While they smelled promising, the appearance was a little disconcerting—something akin to flying saucers. And the batter spread more than we expected, creating multi-cellular conglomerations, each with a date for a nucleus. 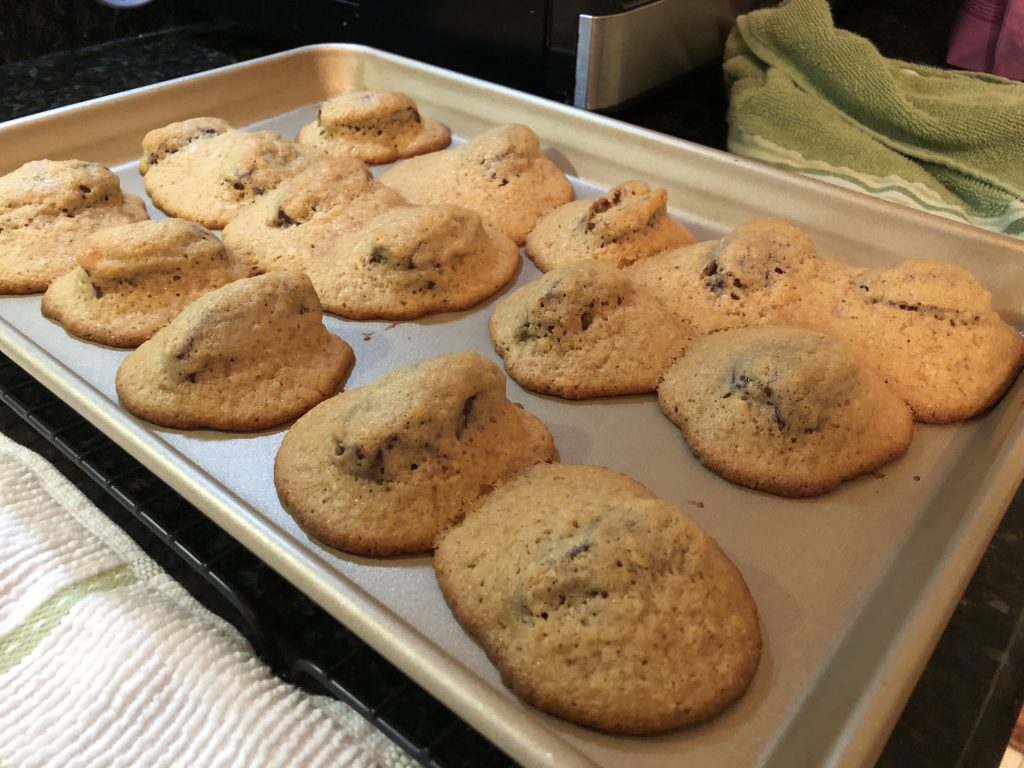 Cutting one open, we found that the gumdrop had retained its shape rather than liquefying, creating a colorful, gem-like center. The flavor and chew was nice, and paired surprisingly well with the light, buttery cookie encasing it. 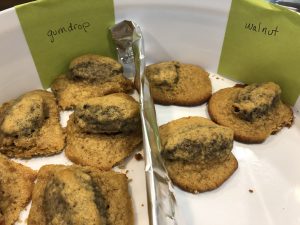 The least healthy idea would have been to eat them all on my own. So as I fed them to unsuspecting coworkers and classmates the next day, I dutifully collected the reviews of the experiment:

“It’s healthy—there’s fruit in the middle. That’s how it works, right?”

“This tastes like beer. I have no idea why. But it’s good!”

“The lemon gumdrop is bright and acidic against the sweetness of the date.”

Walnut was more popular overall, yet lemon gumdrops also seemed to be a hit. What I liked most was how surprised everyone was to find that they actually liked these strange-looking cookies. The students at Mundelein in 1941 were onto something here, incorporating the popular dried dates with available ingredients while attempting to address nutritional concerns over maintaining a healthy diet during the holidays, which is still very relevant today.

One final observation from my mom: “A gumdrop, inside a date, inside a cookie. It’s the turducken of desserts… with much less protein.”

So as the holidays draw near, a bit of general advice from my personal RDN: don’t expect desserts to be nutritious! They can still tell us a lot about our time and about the past, and as long as you eat a variety of nutritious foods along with them, they can still be good for the soul.

Scarlett is a Graduate Assistant and in the first year of her M.A. in Public History at Loyola University Chicago. Originally from the Chicago suburbs, she enjoys singing musical theatre and opera, and is looking forward to baking lots of historic baked goods for the holidays.