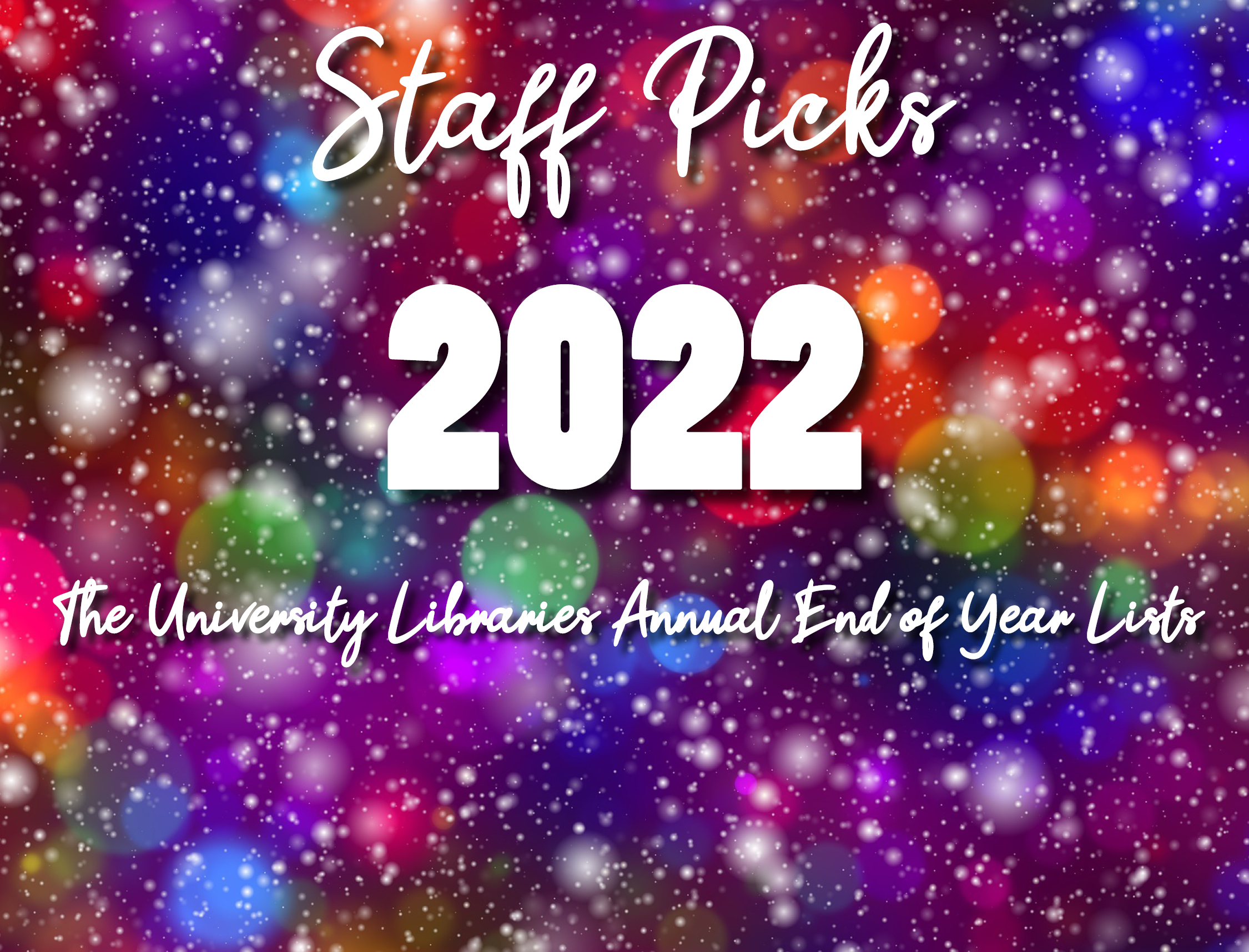 During the month of December, Loyola Libraries staff make lists and check them twice. What are these lists about? Anything! You can look at past years’ lists here and stay tuned for more lists!

First recorded by Sigeric, Archbishop of Canterbury in the tenth Century, the Via Francigena is an ancient pilgrimage route leading from Canterbury in England to Rome and the Vatican, and then south through Italy to the departure point for the Holy Land. Today the route offers the slow tourism favored by its multiple users. Part of the Monte Mario Park, a few minutes’ walk from the John Felice Rome Center (JFRC), Mons Gaudii affords weary pilgrims and hikers on the route their first glimpse of the eternal city, including the dome of St Peter’s Basilica. Travelers throughout history have enjoyed this panorama. JFRC students will recognize some of their favorite spots in the city, another step on the way to making Rome their second home. Depending on atmospheric conditions, the light is amazing, especially at sunset.

The Balduina station is the nearest access point to a highly successful civic infrastructure project built above the FL3 local train line. Officially opened in 2016, the linear park is divided into a cycle path and a foot way, thus providing space for walkers, runners, and cyclists. The route leads from the hospital San Filippo Neri in the north to Monte Ciocci in the south, (see below). Covering approximately six kilometers, the linear park has become a firm favorite among local residents, because it is safe and quiet, and enables all ages to enjoy fresh air, exercise, and natural and urban scenery. It is also a convenient route for environmentally conscious commuters. JFRC students are encouraged to observe the cross section of local community who frequent the park and note how its composition changes depending on location. They can decompress with a friend by walking and talking along the route, or get physical and run. Mensa (the cafeteria) will replenish them with pizza and pasta on their return.

This bronze gilded statue of the Madonna is raised above the tree line on a high point of Monte Mario and is visible from many parts of the city below. Once they recognize her, JFRC students can use her location to know the direction of their home in Rome. Glimpsing her sassy pose between the trees while hiking in the Monte Mario Park is a game of cat and mouse. Having the privilege to get up close by gaining access to the Don Orione Park can be awe-inspiring. The Madonna is affectionately known as the Madonnina, the ‘ina’ diminutive only referencing endearment not her size. She is a votive offering made after the Second World War by the followers of Don Orione to give thanks for Rome having been spared from the worst of the bombing. Many ordinary Romans donated money to the project. The sculptor, Arrigo Minerbi, was a Jew who had been saved from persecution by the Don Orione Institution when the Nazis and Fascists rounded up the Jews of the city. First erected in 1953, the statue stands nine meters tall and is raised on a plinth of 19 meters. It suffered storm damage in 2009, but was immediately renovated and rededicated in June 2010 by Pope Benedict XVI. My biggest surprise in researching the Madonnina this time around was to find that she has a twin in Boston, Massachusetts. As soon as the statue was erected in Rome, Biagio Farese, a radio announcer, asked the sculptor for a copy to be made for the Don Orione Home there. This time in bronze and copper, the statue is named Madonna Queen of the Universe and overlooks the city from the Northeast.

Santa Maria della Pietà is a park of over 26 hectares north of the JFRC easily reached by bus or along the Linear Park route. Originally a mental asylum which the last inmates left only in 1999, it now houses various municipal offices, health care facilities, charities, a chapel, a day care center, a veterinary laboratory, a library and archives, art work, abandoned buildings and the Museum of the Mind. On Sunday mornings, a market known as Monte Mario’s Porta Portese (after its more famous counterpart) takes place in the vicinity. In its last iteration, the Museum of the Mind earned a well-deserved write-up in the New York Times. Currently (December 2022), the museum is undergoing renovation. Thanks to an injection of fifty million euro provided by the European Union as part of the Italian National Recovery and Resilience Plan, the park is benefitting from pedestrianization and there are plans to requalify the whole area with facilities dedicated to the health and wellness of local citizens. Already many of them use the space for leisure activities. I encourage JFRC students to do likewise and discover the richness of the suburbs of Rome.

The gestation period for the Monte Ciocci Park was, like many contemporary Roman infrastructure projects, long and complicated. It opened to the joy of most local residents in 2013. The panoramic view from the edge of the clay hills it stands on looks out over the Vatican City, Rome itself, the Alban hills to the south and the Apennines, with snow covering in the winter, to the east. In the immediate foreground is a bridge with fifteen arches which once carried the Vatican railway over the valley below. There is also the more modern railway bridge which takes the FL3 line to its San Pietro (St Peter’s) stop after the Valle Aurelia station. Still known as Valle dell’Inferno (Hell Valley) among locals, Valle Aurelia can be viewed to the west. The Latin word for lower has the same root as hell but the locality was also hellish because of the many furnaces used to make bricks and pottery from the local clay. A couple of the tall, brick chimneys remain but the quarries and related industries have been long closed. Monte Ciocci is also home to an agrarian high school, where students study and practice horticulture, some allotments where visitors are welcome to admire the fruit, vegetables, and flowers that the friendly growers cultivate, and a working farm with sheep, goats, dogs, and geese. Also of interest are the remains of fortifications built in the late 19th Century. Designed to protect the city by surrounding it with a series of forts, the Monte Ciocci segment includes two casements where weapons were concealed, and other buildings covered in earth.

The French Military Cemetery Hidden from sight by trees despite its hilltop location, the French Military Cemetery hosted Pope Francis for the All Souls’ Day mass as recently as 2021. Cemeteries always reveal stories of their dead. The contrast in the gravestones here will surprise visitors into a greater understanding of the make-up of the French Army, which fought on the side of the Allies. They were blocked by the Gustav Line at Monte Cassino during the 1943-44 campaign. Showing sensitivity to difference in the immediate aftermath of the war when the cemetery was constructed, the facilities for mourners’ ritual practices in recognition of their varying traditions are moving. My curiosity is also aroused by the group of graves found at the south east corner which bear names of German origin. The Cemetery is included in the Monte Mario Hike, which provides a fun opportunity to see more of the landmarks above. Visiting it will whet JFRC students’ appetite for discovering the myriad of ancient, modern, and contemporary burial practices of the Italian peninsula including other nationalities’ war cemeteries and the unmissable non-Catholic cemetery of Rome.

Anne Wittrick is librarian at the John Felice Rome Center, which is on Monte Mario, the highest hill in Rome, if not one of the original seven. A keen hiker, Anne leads students and intrepid faculty members through the Monte Mario woods to discover local history and plant seeds for research topics.

2 thoughts on “2022 Staff Picks: Spots that every John Felice Rome Center student should visit in the Monte Mario neighborhood”