Concert Dance, Inc. was an Artist-in-Residence at Mundelein College beginning in 1982. The partnership began when a member of the dance company visited Mundelein in hopes to hang promotional posters. On a whim, the dancer asked if the college would be interested in having a dance company in-residence. Under the leadership of Venetia Stifler, the company began their partnership with Mundelein. 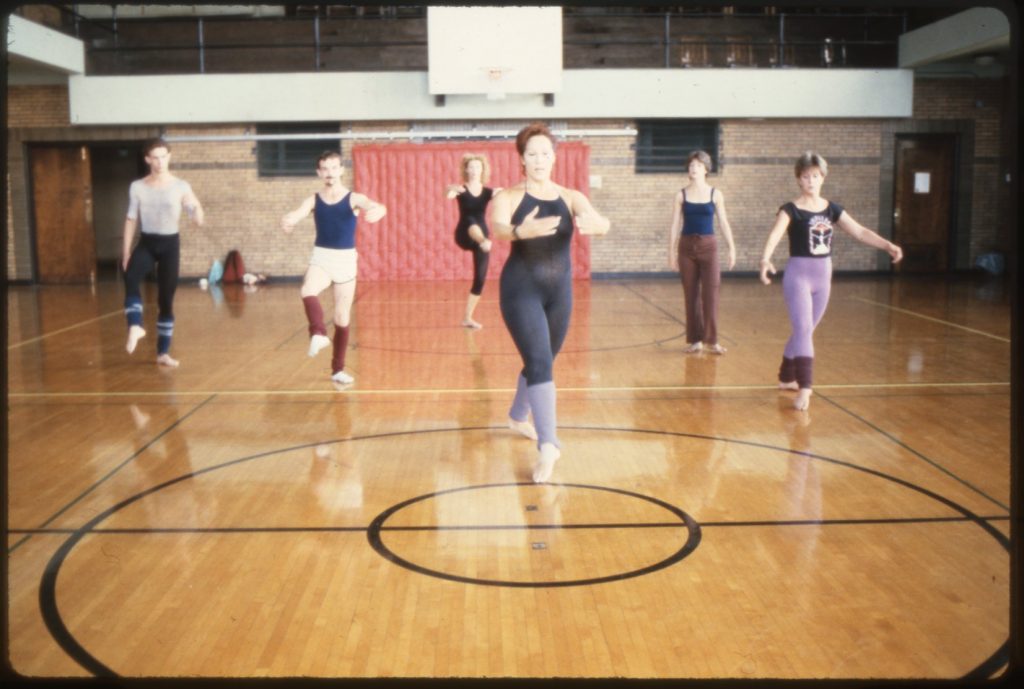 Concert Dance Inc. had regional recognition. The company worked on multiple collaborative projects. In 1986, Stifler received the Chicago Dance Arts Coalition’s Ruth Page Award for Artistic Achievement of the Year for her work Magic Spaces that was part of a collaborative project with Frank Vodvarka. Vodvarka was an artist affiliated with Mundelein College who had an extensive background in architecture. They also worked on The Chicago Project, which was created to celebrate Chicago’s 150th anniversary as a city. 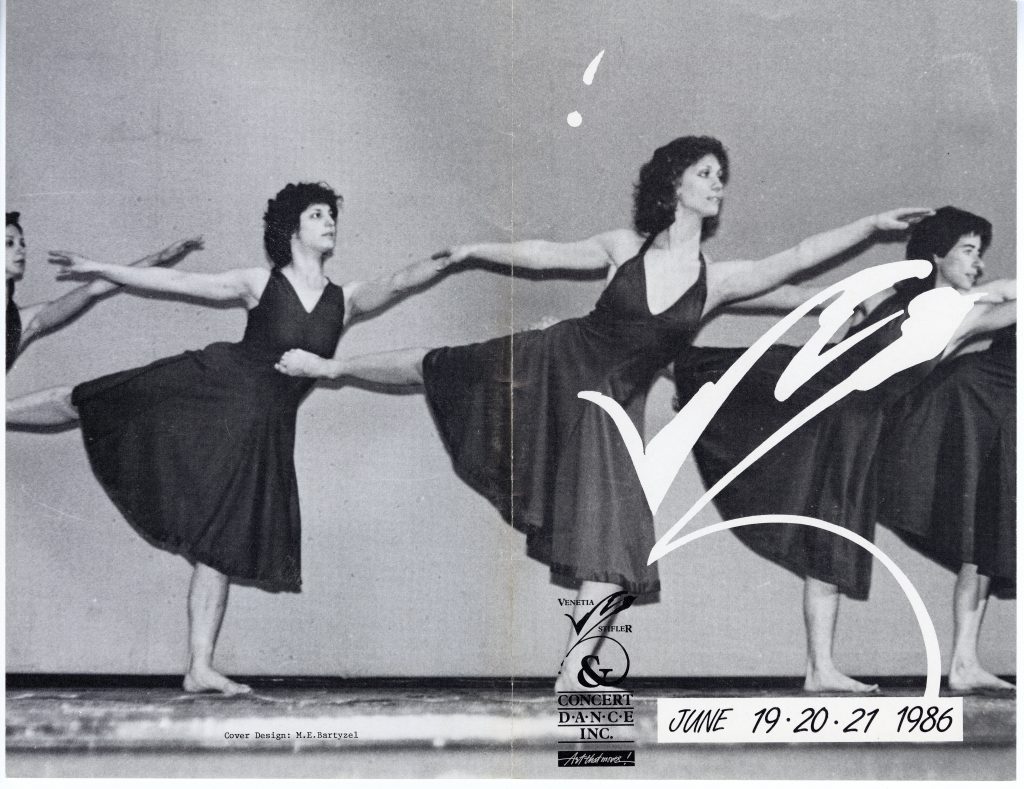 Concert Dance Inc. left their Mundelein Residence around 1988, but the company is still performing today with Venetia Stifler as their director.

Students’ interactions with dance were not limited to artists-in-residence. While browsing through Skyscraper articles and files of photos, I learned about on-campus dance clubs. In 1935, the Social Dancing club decided it was time to step up their dancing skills. In an October Skyscraper article, the club calls out for people wanting to improve their dancing skills to look amazing at the Junior Prom (see Fig. 3). 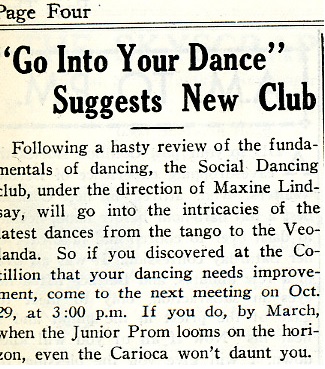 Dance clubs and drama typically merged. From the resources I went through, I found distinct mentions of various techniques. In 1933, the Skyscraper mentions performances of Interpretative Dance, in which motion accompanied spoken word. Interpretative Dances combine two art forms, poetry and dance, which gives audience members a visual for what is in the artist’s mind. In the 1940s, the Skyscraper mentions ballet dances were performed on campus (see Fig. 4). Ballets are some of the oldest forms of dancing still practiced regularly today. Classical ballets like The Nutcracker and Sleeping Beauty attract numerous visitors. Photos from the 1950s and 1960s present modern dance classes that practiced in the gymnasium (See fig. 5 and 6). Modern dance differed from ballet by allowing more torso movement appearing less rigid. A Skyscraper article from 1966 mentions an upcoming choreography concert: “In a unique cooperation, the Mundelein modern dance club, Orchesis, will present a concert … with the Judith Scott Dance Company” (Skyscraper Volume 36 Issue 13). 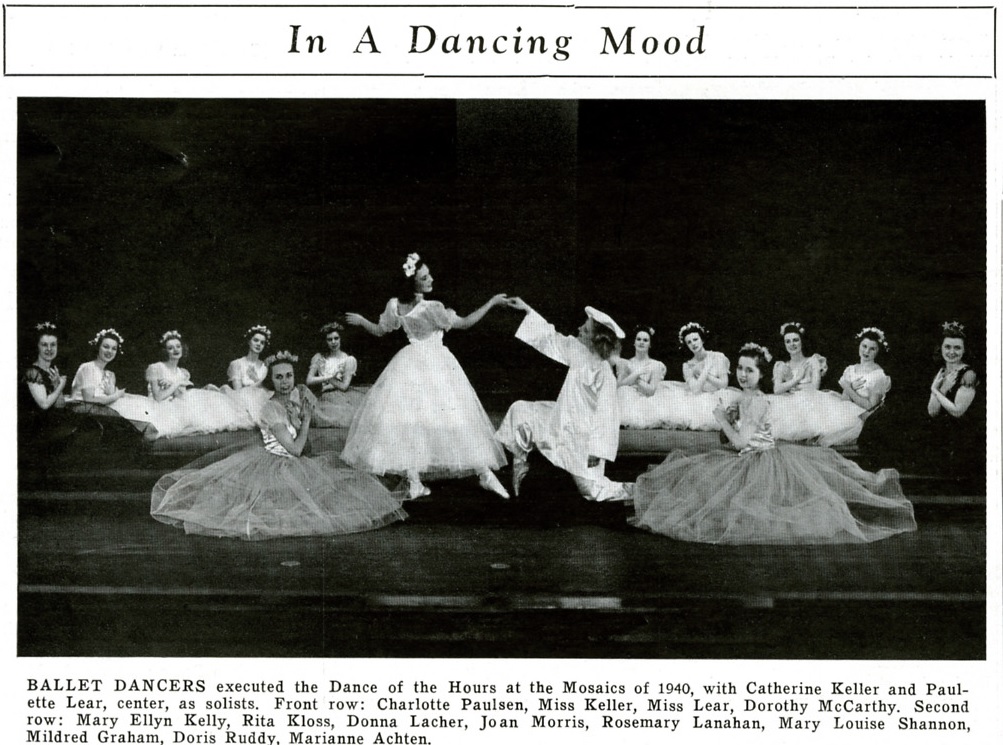 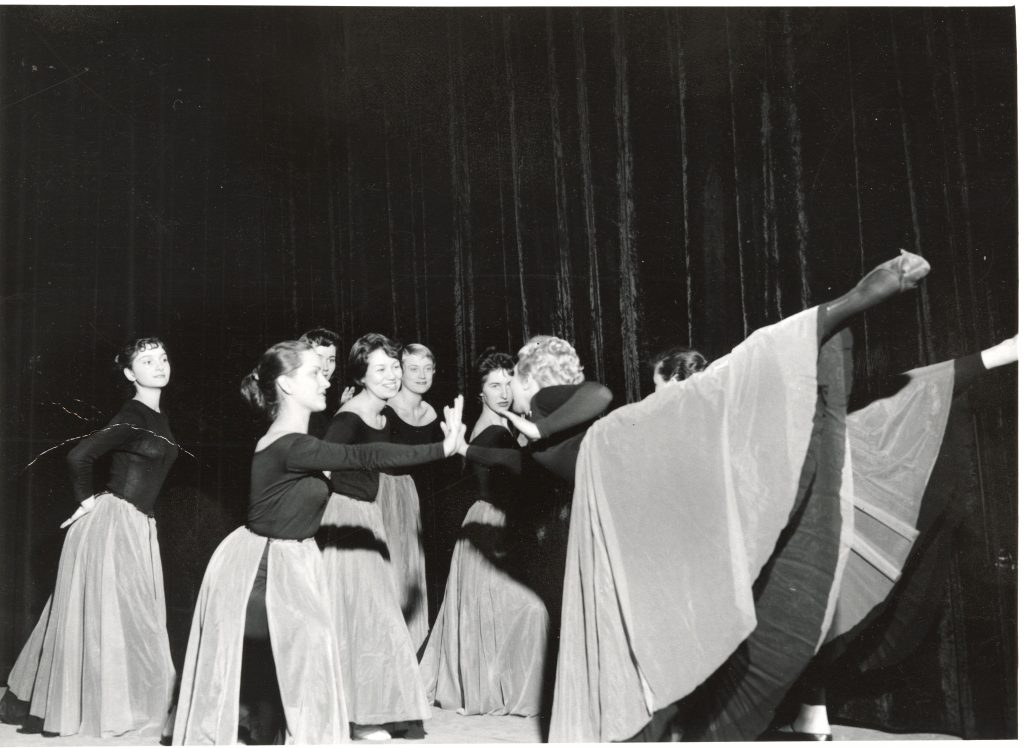 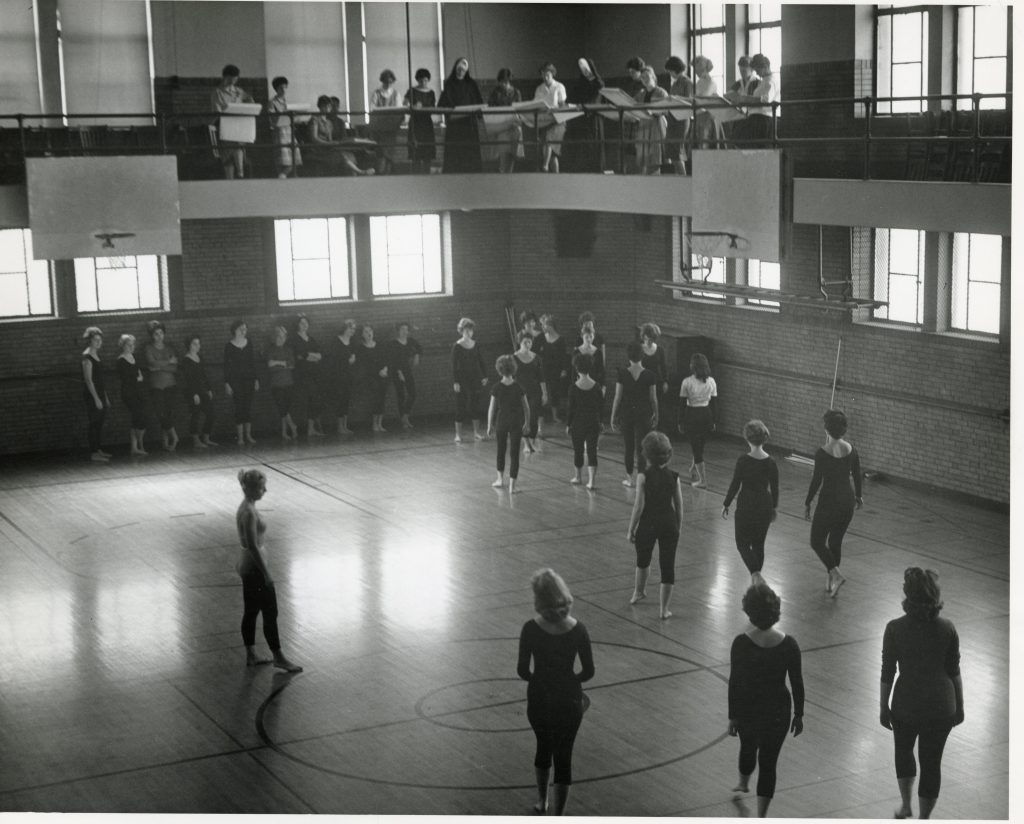 From the materials left behind to research, it would appear that social dances affected most students at Mundelein. This came as a surprise to me because many Christian colleges and universities disapproved of co-ed dancing. Not only did this thinking spur from movies like Footloose, but also in my own experience growing up Christian and the stigmas I was taught about social dancing. At Mundelein there were Tea Dances, Sophomore Coalition, Junior Prom, Senior Ball, Coke Dances, Swing Dances, and so many others. Social dances were a chance for co-ed interaction, mostly between Mundelein and Loyola students. Cadet Balls gave Mundelein students an opportunity to spend time with the military personnel (See Fig. 7). 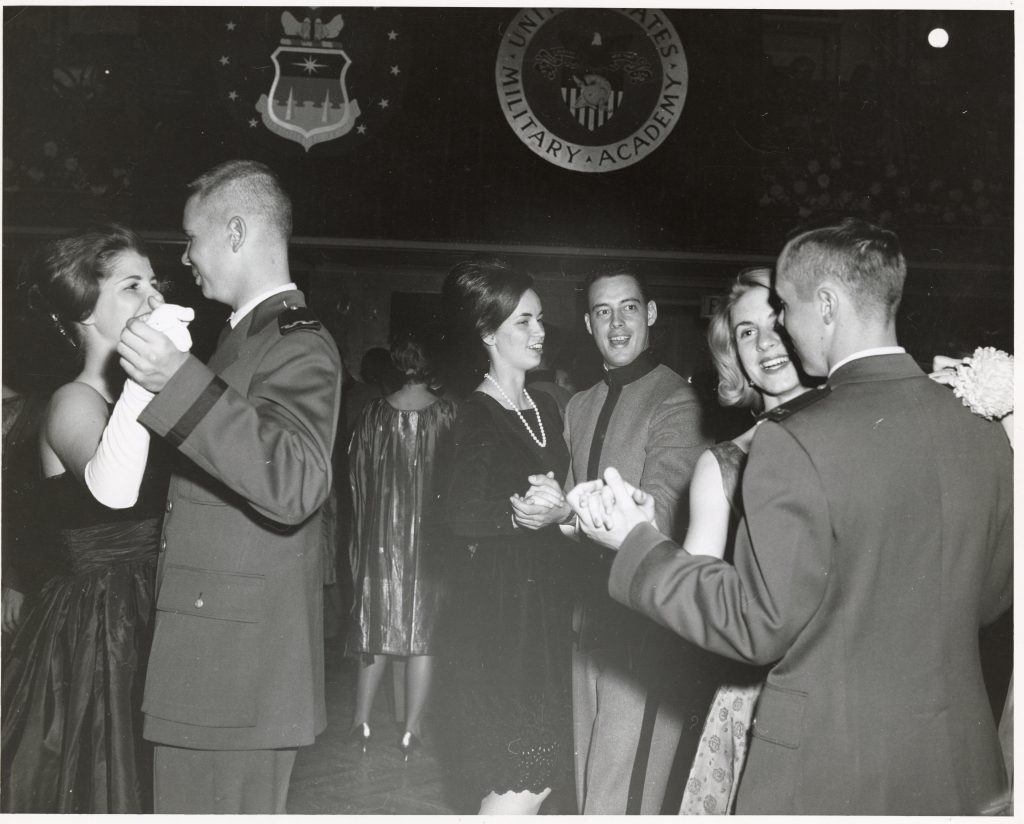 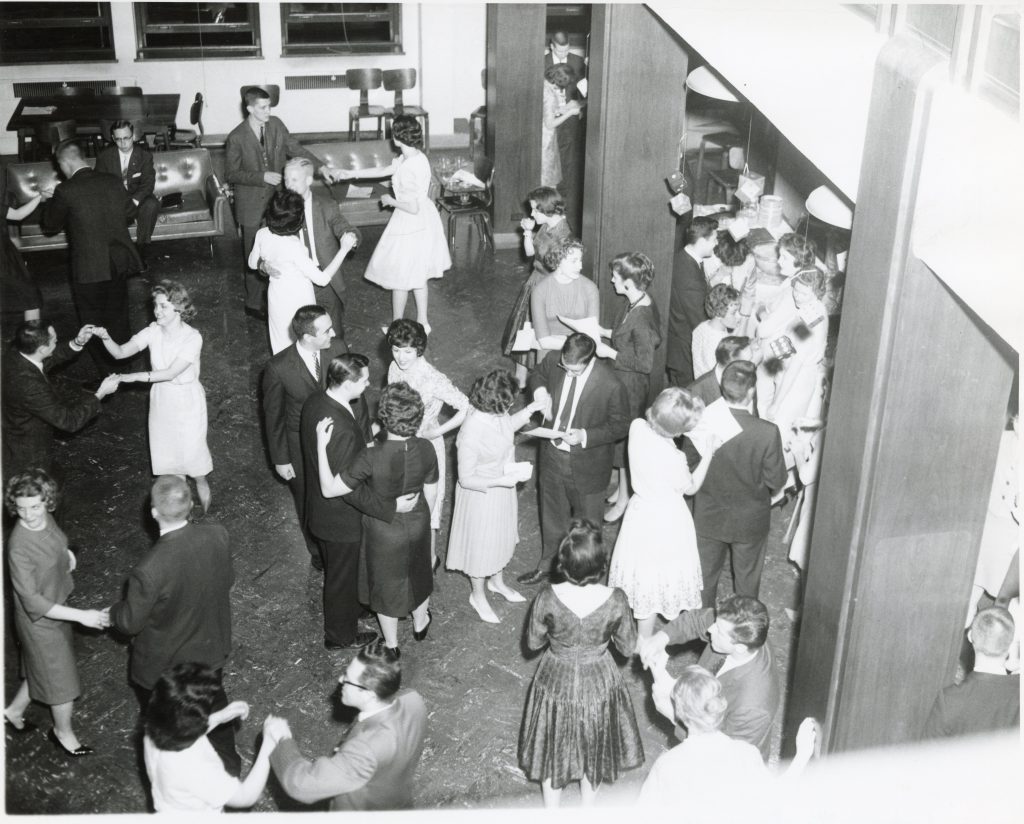 I was only able to scratch the surface of dance at Mundelein, and I am sure there is a lot that I am missing. From the documents and photos I browsed, I have gathered that social dances were more popular than technique dances like ballet and modern. However, I have enjoyed everything I have viewed in the research I have done. With my life being extremely involved in dance and dealing with battles between Christian denominations and their opinions on dance, it was comforting to see a Christian university that did not ban dancing, but promoted it with classes and events. The date for this post, October 22, 2019, was no accident. It was chosen because of the National Arts and Humanities Month observance day for dance.

Miranda Ridener is a Graduate Assistant for the Women and Leadership Archives. She has her undergraduate degree in History and Dance from Anderson University Anderson, Indiana and she is currently pursuing her master’s in Public History from Loyola University.