There was something not quite right about the working title for this folder. The first letters of the student organization’s full name, “Latins United for Our Cultural Heritage”, were not lining up with its acronym, LUCIR. This thought continued to bug me as I scanned the folder of pictures, leading me to pursue a fascinating trail through a published book, several other folders in the Women and Leadership Archives’ (WLA) collection and a yearbook.

As part of my work at the Women and Leadership Archives, I digitize photographs, slides and negatives from the Mundelein College* Photograph Collection. These digitized images are then hosted online, along with their metadata (or as I like to call it, data about data), so that more individuals can hopefully gain access to them. We have standardized categories for the photos’ metadata, so each photograph will contain details such as the year/date it was taken, a description of the event/individuals in the photo, its dimensions, and the subject matters it contains (for instance, “Mundelein College”, “college students”). Digitizing images also has the added advantage of protecting the physical materials from the wear and tear of future handling, which can aid their longevity.

The particular folder I was scanning, temporarily titled “Latins United for Our Cultural Heritage (LUCIR)”, was an interesting one with rich documentation of what seemed to be LUCIR’s activities. There were pictures of a finger puppet show, a piñata, a bake sale, and a table display of Latin American items among others, providing insight into what LUCIR did.

However, the lack of dates and further information about the photographs was slightly problematic. When keying in the metadata for photographs, we are generally taught to give a rough decade or date instead of simply noting ‘date unknown’. This is because even noting a decade range (i.e 198?) can help researchers situate the photographs in time when they come across it later. I therefore decided to go looking for clues that would enable me to figure out when the activities in the pictures were taking place. 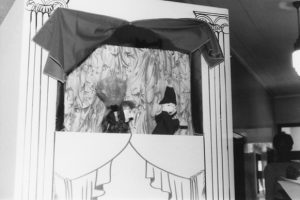 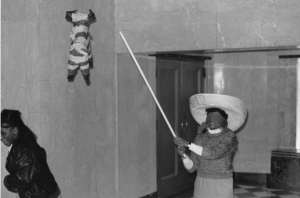 As with most questions I had, I first turned to Google to see if it could provide me with a research compass. Typing in the search terms, “Latins United for Our Cultural Heritage (LUCIR)”, quickly pulled up an entry in a book, detailing that the LUCIR was established in 1986 and had been reorganized from an earlier organization, the Hispanics for Advancement and Culture (H.A.C.E). The footnote for this piece of information pointed to a box from the Hispanic Institute Records, also at the WLA, so down into the stacks (a term used to refer to the holding area for an archive’s/library’s collections) I went to retrieve it and read the information for myself.

One file led to another and I found that while the documents did not bear any trace of LUCIR being an acronym for “Latins United for Our Cultural Heritage”, it appeared to have held at least two names: “Latins United for Cultural Images and Resources” in 1985 and “Latinos United for Cultural Images and Resources” in 1987. However, I could not locate any source on the organization’s relation to H.A.C.E so that relationship still bears further investigation. 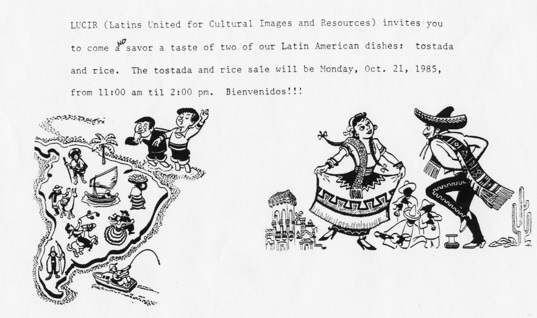 Setting aside the possibility that the author was privy to information that I do not have, the two folders still challenge some of the information published in the text. Discovering these discrepancies reminded me of something my history professors had always emphasized in class – “Always go back to your primary sources! It might very well be that your references are quoting information from an erroneous secondary source!” In the face of the vast amount of information that requires synthesis into coherent writing, I am often tempted to rely on secondary sources for facts such as dates, names etc. in order to devote more time and attention to the crafting of arguments. But as the example of LUCIR has reminded me, secondary sources can sometimes be erroneous and not looking at the primary sources can lead to the perpetuation of errors. That is what I find so important about the existence of open archives like the Women and Leadership Archives – anyone can access the documents to look at the primary documents for themselves and draw their own conclusions.

Examining primary documents also leads us to new questions about context and methodology. Why did the members of LUCIR decide to change the first part of the organization’s name to “Latinos” instead of “Latins”? Had certain connotations arisen about either word in the 1980s? Where could I find more information on LUCIR?

The third question led me to look through the 1985 Mundelein College yearbook. To my delight, I was able to locate 2 pictures (figures 4 and 5) from the LUCIR folder that had been published in the yearbook. Happily, the published pictures had informative captions, enabling me to provide further context for these photos such as the names of individuals and information on the activities pictured. In the process, I was also able to identify a key figure that kept appearing in the LUCIR photos – Kateri O’Shea, BVM – and learn that she had been a Spanish professor at Mundelein College. Additionally, I was able to identify what stamped notes (figure 6) on the back of these photographs meant; they corresponded to the year and page number of the yearbook. Knowing this means that I can keep a lookout for similar stamped notes in the future and look up the yearbooks they refer to for more information on the pictures. 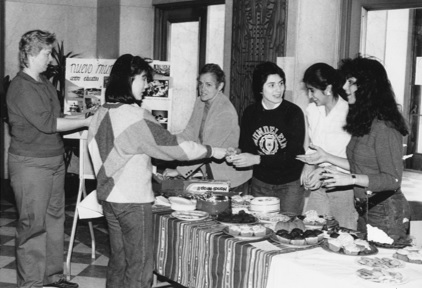 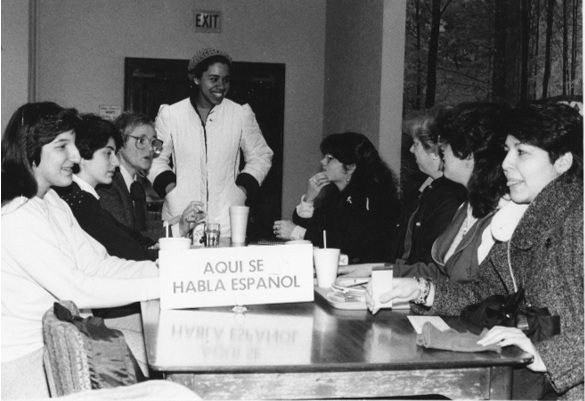 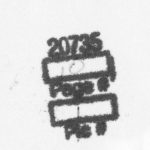 Figure 6. Stamped notes on the back of figure 5, indicating that the picture can be found on page 10 of the yearbook.

In conducting research on this folder of pictures, I was reminded again of the living nature of these materials. The documents and images not only speak of lives and experiences long past, reanimating them, but also whisper and interact with each other. I started with a folder of pictures from the Mundelein College Photograph Collection but only understood more about them after going through relevant folders in the Mundelein College Papers Records, the Hispanic Institute Records, and the 1985 yearbook. And then there is another form of materials speaking, when notes on the backs of photographs from former archivists give me insight into what I am seeing in the photograph. The archives are full of rich stories to tell if we only listen. I hope this post piques your curiosity enough to head down to the WLA to see what stories you can uncover!

* Mundelein College, founded and operated by the Sisters of Charity of the Blessed Virgin Mary (BVM), provided education to women from 1930 until 1991, when it affiliated with Loyola University Chicago. The Mundelein College Photograph Collection consists of a digitized portion of photos and negatives. 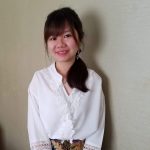 Regina is a Sesquicentennial Scholar at the WLA and in the first year of her M.A. in Digital Humanities at Loyola University Chicago. She graduated from Yale-NUS College, Singapore, with a degree in History and enjoys reading and cooking.