This summer, I am working on the Women and Labor project, a new collaborative project in which I’m using the Mollie Lieber West Papers to create an online exhibit about the life of Mollie and the contributions of women in the labor movement. While I research the history of labor unions, women in the workforce, and Chicago in the 20th century, I am also learning more and more about Mollie West and finding so many cool things in her collection.

Along with Mollie’s many amazing accomplishments in the labor movement and endless stories of her bravery and dedication to social justice, her life included a beautiful love story that is told through letters, objects, and other materials in the collection. 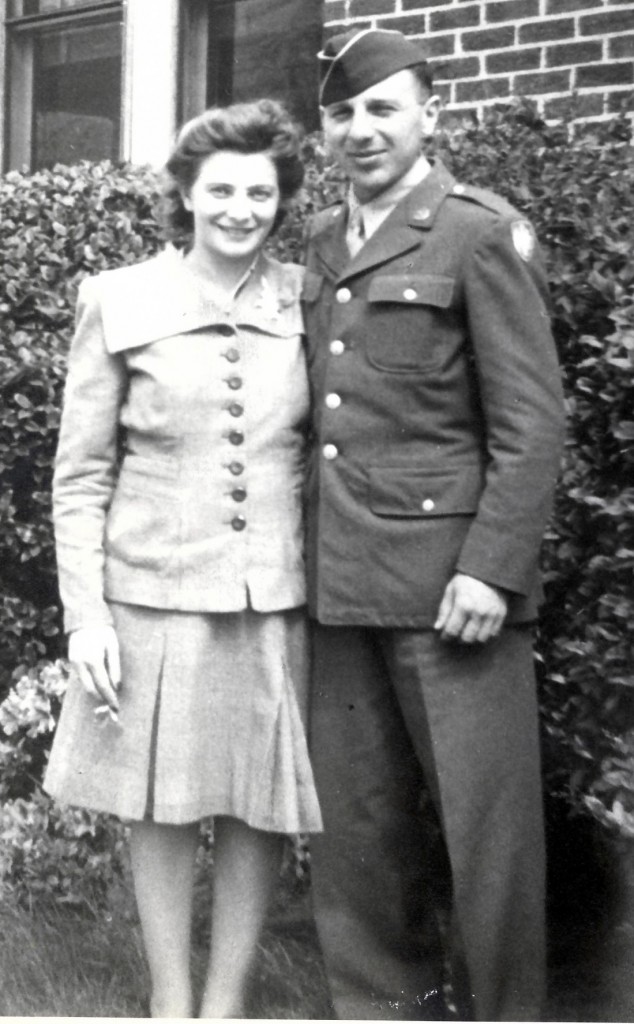 Mollie and Carl Lieber met while working for a newspaper and were married in 1940. Carl volunteered to join the Army in 1943.

Among Mollie’s papers, there is a small vinyl record. The label has an old Pepsi-Cola logo on it and says, “This is a recorded message from your man in service.” This 78 RPM record holds a sweet audio message from Carl Lieber, Mollie’s first husband, sent to her while he was serving in the Army.

During World War II, Americans joined together to help each other and the servicemen fighting overseas, including companies like Pepsi. From my internet research I learned that Pepsi ran canteens in New York, San Francisco, and Washington, D.C. that provided meals, showers, and other services to military men and women. They also set up recording booths in these canteens and sent a traveling recording booth to other military camps where millions of soldiers were able to create these wonderful audio letters to send to their loved ones. Online, I’ve found people talking about records they’ve found that were recorded in Louisiana, California, and Mississippi.

(Note: This blog post is not an endorsement for Pepsi. While this service they provided likely brought joy to many, companies also benefited from creating a patriotic image and connecting their products to the idea of victory in the war.) 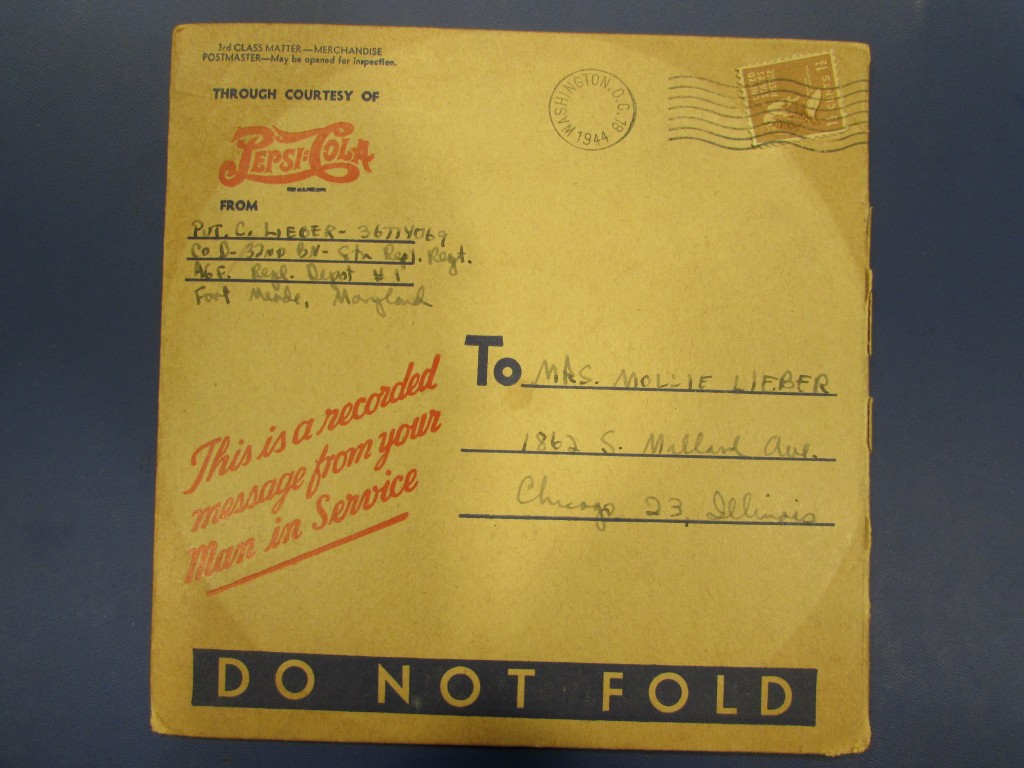 The envelope in which the vinyl record was mailed. 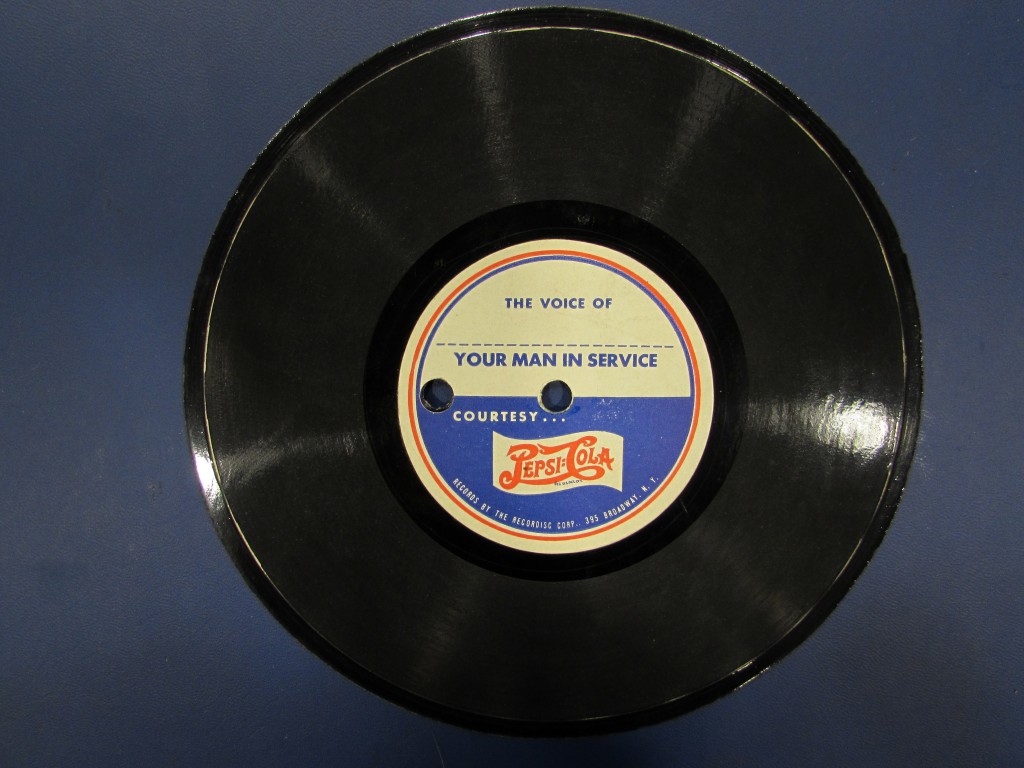 These records were sent from bases and training camps in the United States while soldiers waited to be sent to the war.

Thanks to a grant from Loyola University Chicago’s Center for Textual Studies and Digital Humanities, we were able to have this record and the other audiovisual materials in Mollie’s collection digitized. This gave us the opportunity to hear Carl’s voice and his message for the first time!

We also made another discovery with this digitization. A second record, with a label in Italian, turned out to not contain Italian music as we had expected. This record also held a recorded message from Carl that he had made while on leave for a day in Rome! The touching audio messages on both records reveal a lot about the couple’s relationship and the complex experiences of the war. 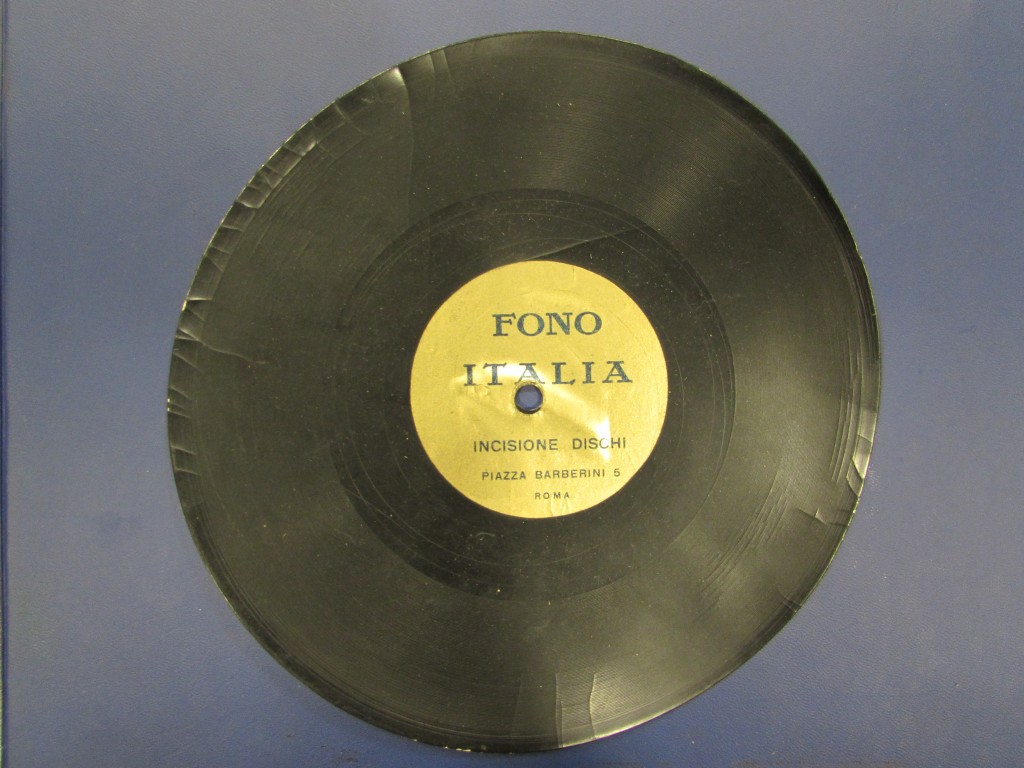 This mysterious Italian record turned out to hold another audio letter from Carl. It was able to be digitally preserved despite being very warped from age.

Carl’s messages and the others I listened to online contain words of encouragement to loved ones not to worry and descriptions of the good things about life in the training camps.

Here is the audio from the first record that Carl sent while in Washington, D.C. I did my best to transcribe Carl’s message, and you can find the transcript below!

“Hello, honey. I thought this would be a very nice way to bring us closer together on my birthday. Although we’re many miles apart, I want you to know that I feel that you are as near and dear to me as you have always been. I’ve never been much at making speeches of this kind, but I’ll try as hard as I can to convey my love to you. I’m making this record in Washington, D.C. I got here on a 12 hour pass. I wrote you a letter about it all. We’ve been married a little over 4 years now and I know you must be going through a pretty trying experience, with your condition and things as they are. But I want you to know that you’ve gotta keep up your morale, and it’s up to us in the armed forces to keep up the civilian morale. That’s why I felt I should make this record and give you a chance to hear my voice so you can celebrate my birthday, even though I’m not there with you to celebrate it together. I love you very much and feel that you should be with me, but I’m sure that as soon as we’re victorious in the war, we can be together and have a fine time together and do all the things we planned to do. Well, I’m getting …my own monotone, so don’t worry about it. I’m not going to sing a song for you, but I want to say now as I close that I love you very much and want you to keep healthy and keep well and do everything possible in order to see that you have a nice life in the future, and that means take care of that baby that’s comin’ along. So long, honey. I love you.”

The Women and Labor digital exhibit will feature the audio from both of these records, as well as more documents, photographs, videos, and artifacts that tell Mollie’s incredible story and the story of women in the labor movement. Follow the Women and Leadership Archives on Facebook to learn more and don’t miss the launch of the exhibit this August!

Caroline Lynd Giannakopoulos is a Graduate Assistant at the WLA and has just completed her Master’s in Public History at Loyola University Chicago. She spends her spare time exploring Chicago, interpreting dreams, and watching cheesy movies with her husband.