Imagine, for a moment, that you are asked to make a political decision that could help a lot of women across the United States. However, if you support it, you worry that many women would be able to do actions that you find abhorrent. This is the situation in which many Catholics found themselves during the 1970s and 1980s debate over the Equal Rights Amendment. Did it really promote abortion, like some people said? 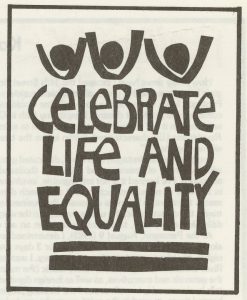 Controversy often follows religious organizations because they can hold contentious views, and the 8th Day Center for Social Justice is one Chicago-area example. Funded by six Catholic orders, the Chicago-based center began in the 1970s as a coalition of six progressive Catholic groups. These men and women viewed the present day as the eighth day of creation, where God will judge mankind and provide salvation to those who followed his teachings. 8th Day believed that its duty was to deliver justice to the world.

The 8th Day Center wanted social reform. Using “action” as a “tool for creating radical spaces of dialogue with systems of power,” the coalition worked with other faith-centered organizations to incite real change. 8th Day also believed in defending the security and wellbeing of women around the world, especially in the United States. 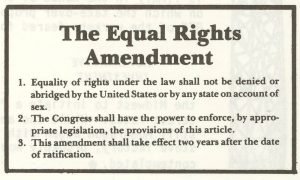 During the 1980s, one of the 8th Day Center’s most visible lobbying efforts revolved around national attempts to add the Equal Rights Amendment (ERA) to the Constitution. The ERA voiced a simple message: “Equality of rights under the law shall not be denied or abridged by the United States or by any state on account of sex.”

This may seem like a straightforward request to equalize the rights of Americans who identify as female. However, it set off a storm of debate between institutions over what kinds of rights would be encompassed under the amendment. American representatives of the Roman Catholic Church struggled to find their place in the discussion. As cited by the Chicago affiliate of the National Council on Catholic Bishops, the Church did not condone the amendment’s implications for women’s reproductive actions, such as abortions. Ultimately, the Catholic Church, a heavily patriarchal system, would not support the ERA. 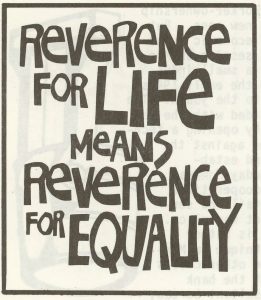 The Catholic Church placed 8th Day in an awkward position: to articulate a position on the ERA, the 8th Day Center needed to adhere to both their social justice purpose and their Catholic tradition. The organization attempted to do that by balancing on a legal argument. In their March 1984 newsletter to their subscribers, 8th Day wrote that Catholics could support the Equal Rights Amendment because the legislation did not legally support abortion. Based on its legislative history, intent, and “scope,” the ERA did not apply to “situations that [derive] from the unique physical characteristics of one sex.” 8th Day went on to explain that “…laws dealing with abortion” at the local or state level “would not be affected one way or another by the ERA because the ERA does not apply to these situations…” They held up a legal argument to their audience of social justice-oriented Catholics.

In short, the center tried to remain in the middle of a major fight by promoting a legal argument to its consumers. It was, and remains, unclear if and how the ERA would have been used to support abortion. Potentially, progressive Catholics could have supported the ERA and maintained their faith because it meant choosing the real positives of gender quality over the hypothetical (though major) negative of abortion promotion.

I think the 8th Day Center made a reasonable legal point. The famous Roe v. Wade Supreme Court case had determined the scope of federal involvement in abortions in the United States in 1973, a decade before 8th Day published this edition of their newsletter. The case’s decision and opinions are worth careful reading. However, that argument does not begin to address the faith-based questions surrounding the ERA, abortion, and Catholic morality. As a matter of fact, the 8th Day avoided the issues entirely because it was so focused on what the ERA did not legally endorse.

In conclusion, when the 8th Day Center for Social Justice lobbied for the Equal Rights Amendment, it entered a complex social and religious fight. It tangled with issues of feminism, women’s reproductive health rights, and religious lobbying. 8th Day continued its social justice activism and became well-known in the Chicago area. Unfortunately, forty-three years later, 8th Day is closing its doors due to unsustainable funding problems. Though it is sad to see them close, it is inspiring that they want everyone to carry on the message of the eighth day of creation: to be “responsible” for “[bringing] the world into fullness of being.”

ngela is a Graduate Assistant at the WLA and is in the first year of the MA in Public History at Loyola University Chicago. Originally from the West Coast, she is enthusiastic about swing dancing, choral music, and pub trivia. Angela is also a devoted National Public Radio listener.

Hello, everyone! My name is Megan and I’m starting my second year of undergraduate studies at the University of Chicago. I’m a history/pre-law major and I’m also a member of Pi Beta Phi Sorority. Now, you may be wondering what a South Side college student like me is doing all the way up here in Rogers Park. Well, I’ve been interning here at the Women and Leadership Archives (WLA)! This summer I have had the amazing opportunity to serve the Black Metropolis Research Consortium (BMRC) and the WLA as the Archie Motley Archival Intern. My duties as an intern were to process and archive the collection of Carol Moseley Braun. 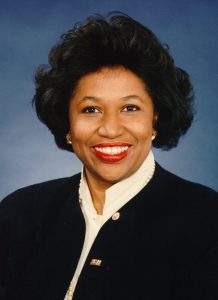 Carol Moseley Braun’s headshot from her time as a US Senator.

Disclaimer: I had little to no knowledge of archives/archiving prior to accepting this internship. When I applied, I viewed archivist as next-level librarians (not a bad thing). I imagined them to be confined to dark, basement-level archives, guarding manuscripts and harboring an inexhaustible knowledge of all things. What I learned, though, is that my imagination is much too active and that archivists are simply humans who love preserving history and knowledge. Working in the WLA and processing Carol Moseley Braun’s papers taught me not only the basics of archiving, but also the importance of maintaining and protecting archives, especially those dedicated to women and other minority groups. Working on Ms. Moseley Braun’s collection has especially highlighted this for me.

Before interning at the WLA this summer, I had never heard of Carol Moseley Braun and was totally unaware of the major waves she made in American history. She attended and graduated from the University of Chicago’s Law School, was the first female African American U.S. Senator, and was responsible for getting the Confederate flag removed from Daughters of the American Revolution (DAR) signage. She served as Ambassador to New Zealand and even ran for president in 2003. Ms. Moseley Braun is truly an icon and, yet, I feel that almost no one outside of Chicago or politics gives her the credit she is very well due. Institutions like the BMRC and the WLA, though, make it their missions to highlight figures like Carol Moseley Braun and ensure that their voices are and will forever be heard.

Megan and Melanie, two WLA interns, combing through the collection

Megan Naylor was the Archie Motley Archival Intern for summer 2017.  She is completing a Bachelors of Arts at The University of Chicago, with plans to pursue history and pre-law curriculum. She is a member of the Pi Beta Phi Fraternity for Women and was previously the president of her high school’s National Honor Society.