Born in 1932 to Mr. and Mrs. Norbert A Heath, Joan Heath Fortner was active for years in Chicagoland art organizations. An alumna of The Immaculata High School (1950), Mundelein College (1954, BFA), the New York Fashion Academy (1955), and Loyola University (1979, M.A. in Education) Fortner always enjoyed art and sought to pursue it as a career. 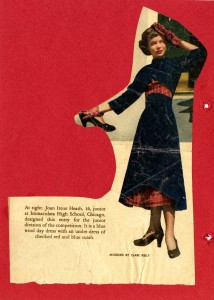 From a young age, Fortner was extremely passionate about art and fashion. She became the youngest person to win the Chicago Tribune American Fashions Competition and would go on to win the competition for five consecutive years. 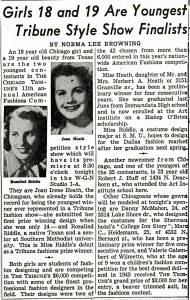 In addition to this award, she was the 1950 recipient of the Bishop O’Brien scholarship to the Art Institute in Chicago. In 1953 she won a second scholarship to the New York Fashion Academy for a design she submitted to a contest by the Evans Fur Company. 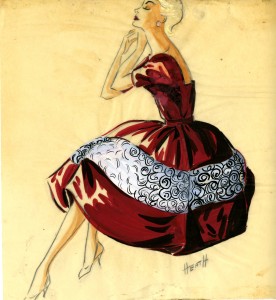 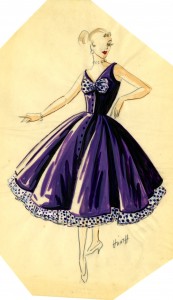 Design sketch by Joan Heath Fortner. The contrasting use of light and dark colors displays the distinct characteristics of her work.

While living in New York, Joan Heath met her husband, Gene Fortner. Following their marriage, the couple lived in New York for four years where she worked as a dress designer before returning to Chicago. While raising three kids, Fortner obtained a Masters in Education from Loyola University Chicago in 1979. Upon receiving her M.A., Fortner became an Art Education Teacher at Mather High School and also worked with District 63 in Niles, Glenview, and Des Plaines. 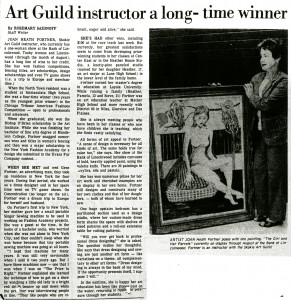 During her lifetime, Fortner has been involved in many art organizations in Chicago and the surrounding suburbs. Most recently, she served as the Vice President of the Des Plaines Art Guild and the executive director of Art Cubes, a nonprofit art service organization funded by the Chicago Department of Cultural Affairs and the Illinois Arts Council that brings the arts to older adults.

Due to her dedication to her work, Fortner has won many awards and today she is still extremely active in her community. Along with teaching art classes, she is currently working on watercolor and acrylic paintings. 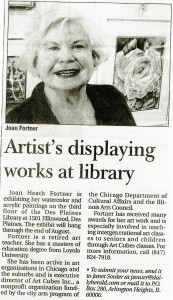 An article highlighting an exhibit of Fortner’s work, n.d.